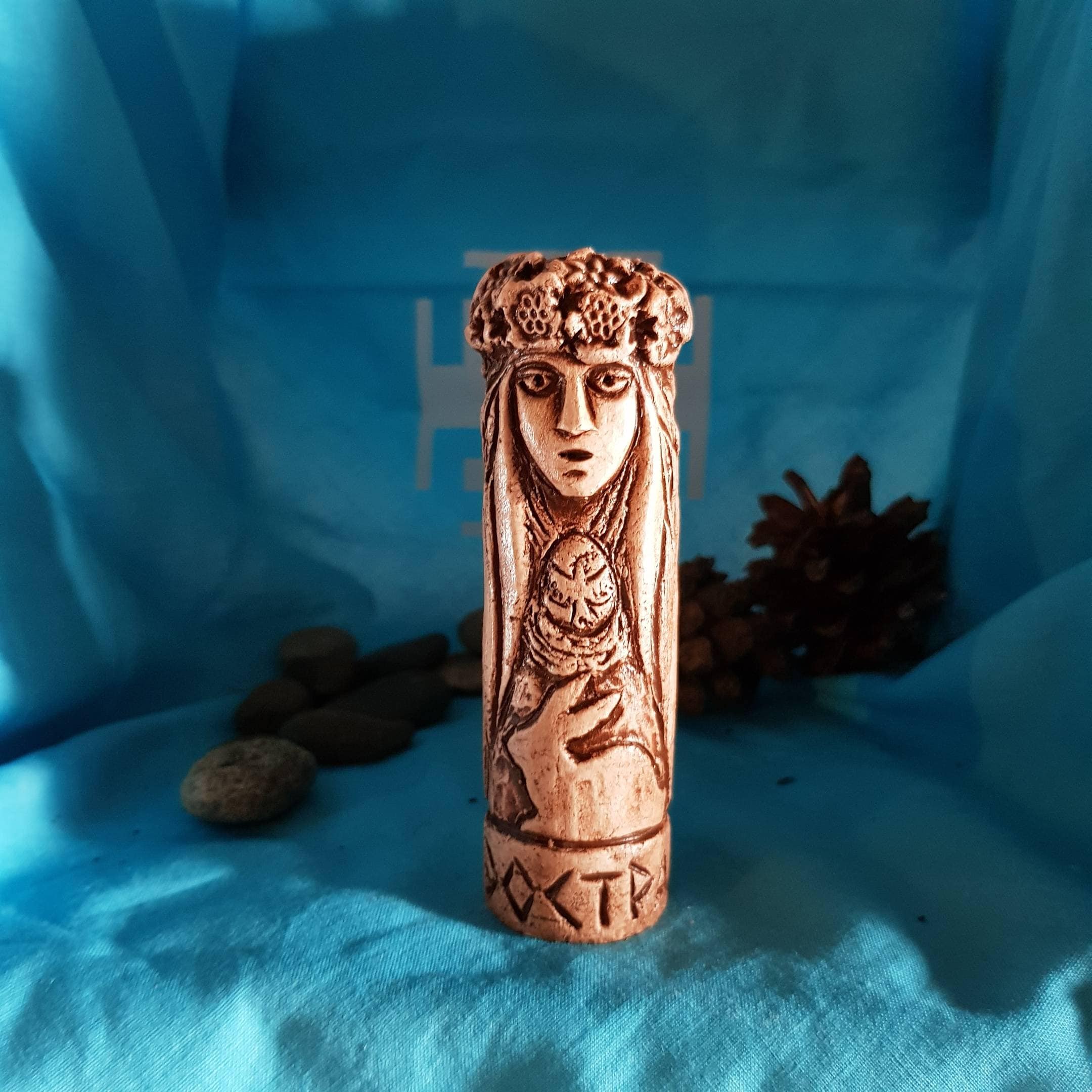 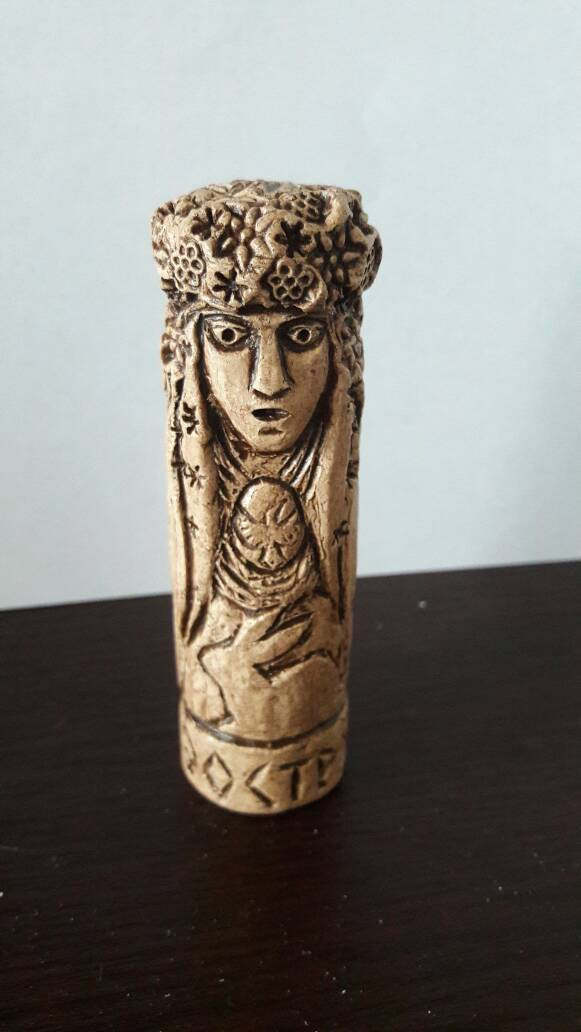 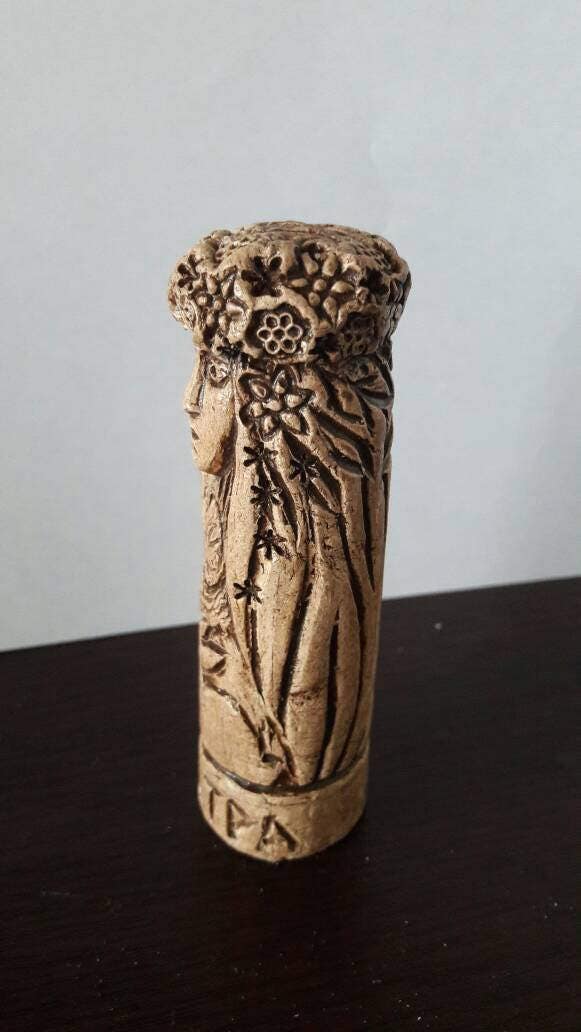 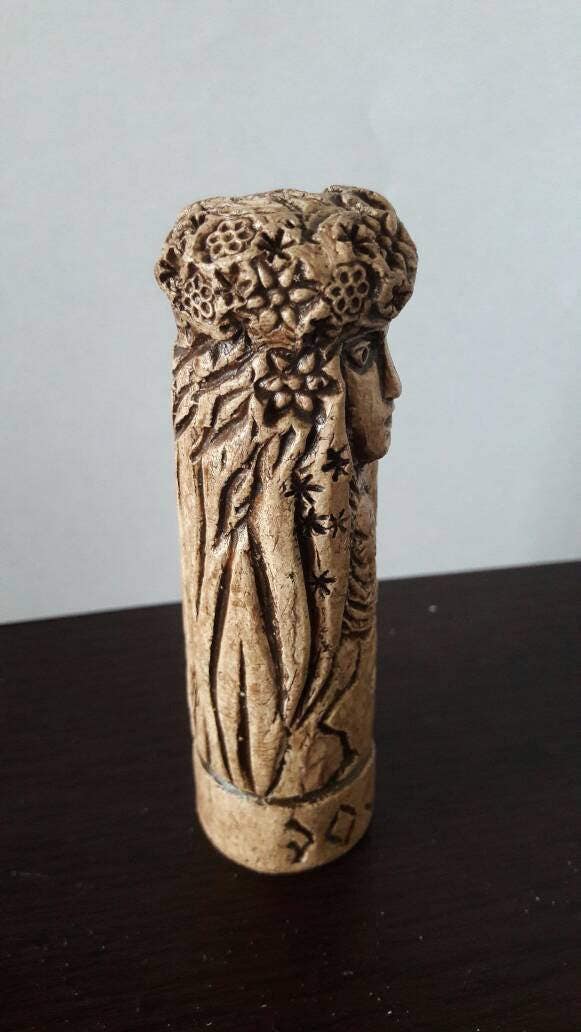 This is a small 10 cm tall handcrafted from clay statue of Eostre. Order it alone or in combination with a Sun Post or a Stone Post.

Ēostre or Ostara (Old English: Ēastre [æːɑstre], Northumbrian dialect Ēostre [eːostre]; Old High German: *Ôstara (reconstructed form)) is a Germanic goddess who, by way of the Germanic month bearing her name (Northumbrian: Ēosturmōnaþ; West Saxon: Ēastermōnaþ; Old High German: Ôstarmânoth ), is the namesake of the festival of Easter in some languages. Ēostre is attested solely by Bede in his 8th-century work The Reckoning of Time, where Bede states that during Ēosturmōnaþ (the equivalent of April), pagan Anglo-Saxons had held feasts in Ēostre's honor, but that this tradition had died out by his time, replaced by the Christian Paschal month, a celebration of the resurrection of Jesus.

By way of linguistic reconstruction, the matter of a goddess called *Austrō in the Proto-Germanic language has been examined in detail since the foundation of Germanic philology in the 19th century by scholar Jacob Grimm and others. As the Germanic languages descend from Proto-Indo-European (PIE), historical linguists have traced the name to a Proto-Indo-European goddess of the dawn *H₂ewsṓs (→ *Ausṓs), from which descends the Common Germanic divinity from whom Ēostre and Ostara are held to descend. Additionally, scholars have linked the goddess's name to a variety of Germanic personal names, a series of location names (toponyms) in England, and, discovered in 1958, over 150 inscriptions from the 2nd century BCE referring to the matronae Austriahenae.

Theories connecting Ēostre with records of Germanic Easter customs, including hares and eggs, have been proposed. Particularly prior to the discovery of the matronae Austriahenae and further developments in Indo-European studies, debate has occurred among some scholars about whether or not the goddess was an invention of Bede. Ēostre and Ostara are sometimes referenced in modern popular culture and are venerated in some forms of Germanic paganism.

Absolutely beautiful craftmenship will be buying more from this seller would highly recommend!

They are absolutely perfect. Thank you!

I had been looking for a devotional item focused specifically on Eostre. This fit the bill perfectly. A very nice piece. Looks even better than in the photos.