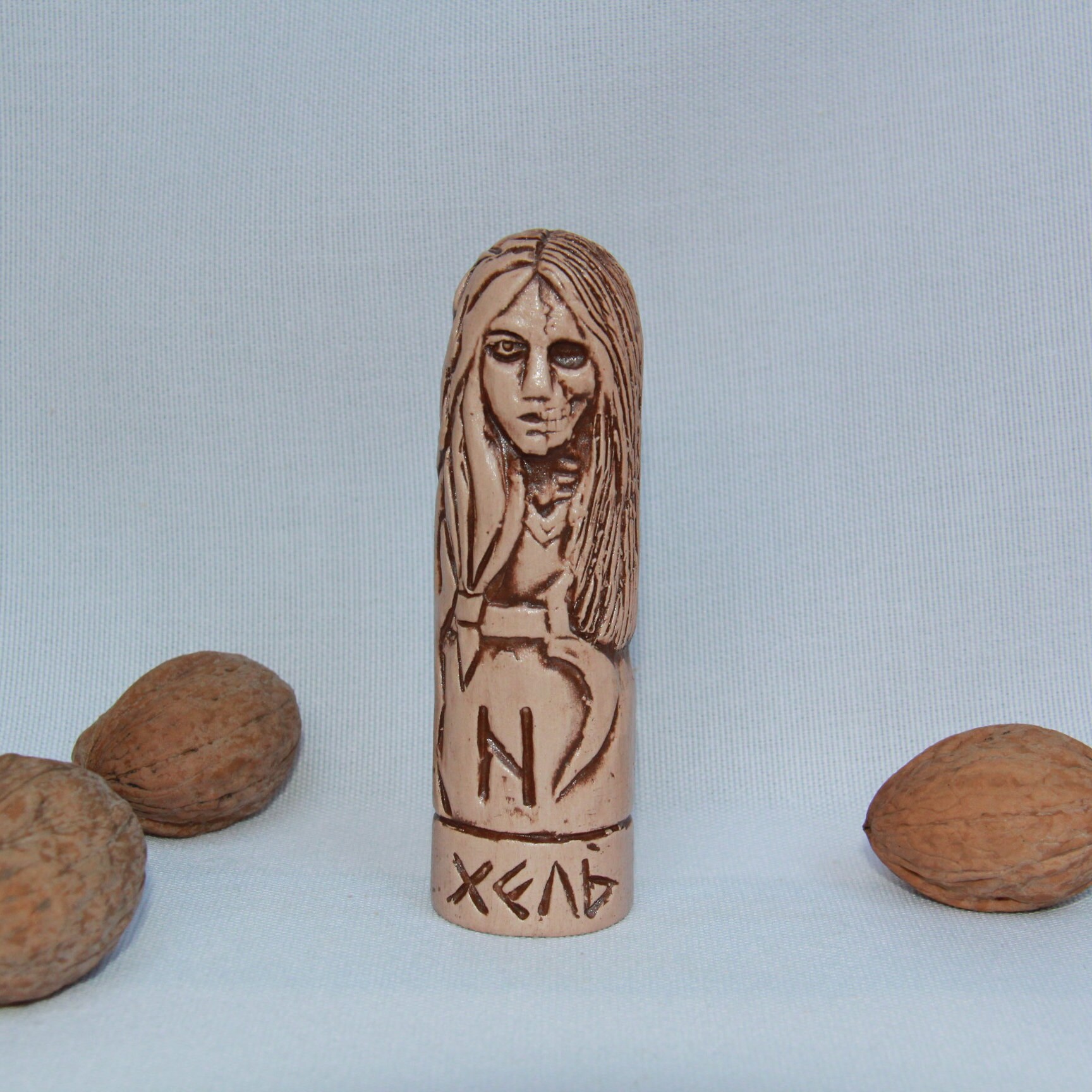 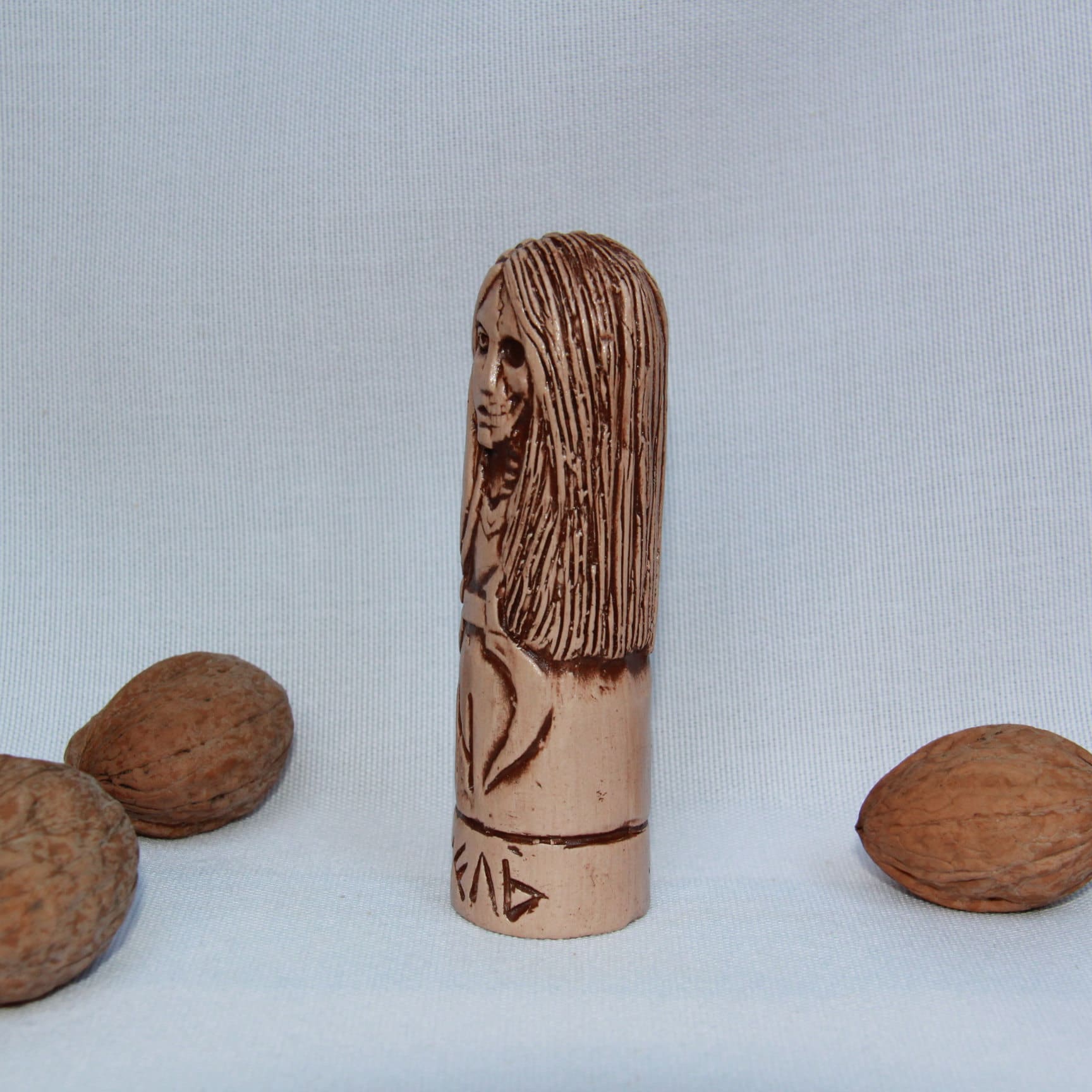 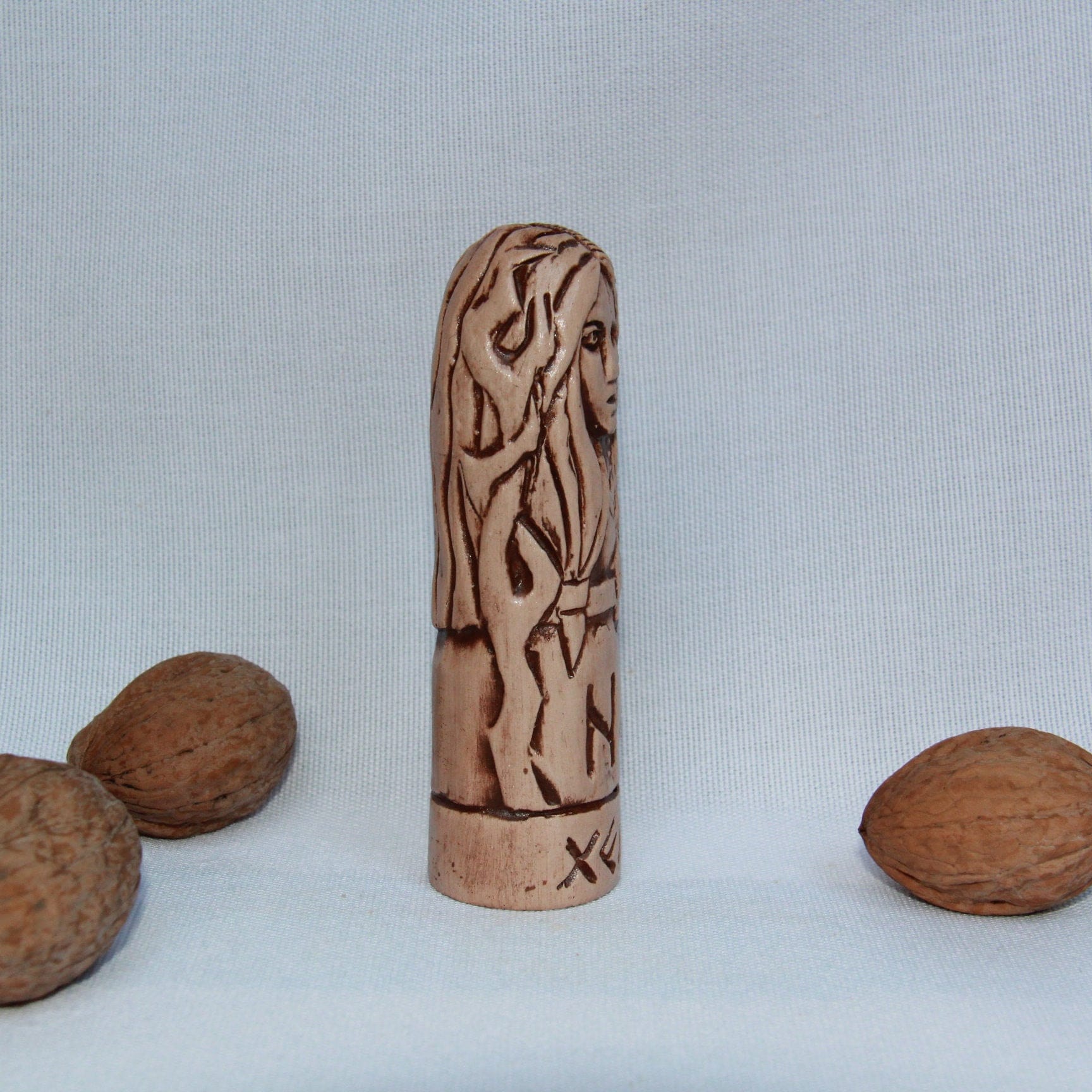 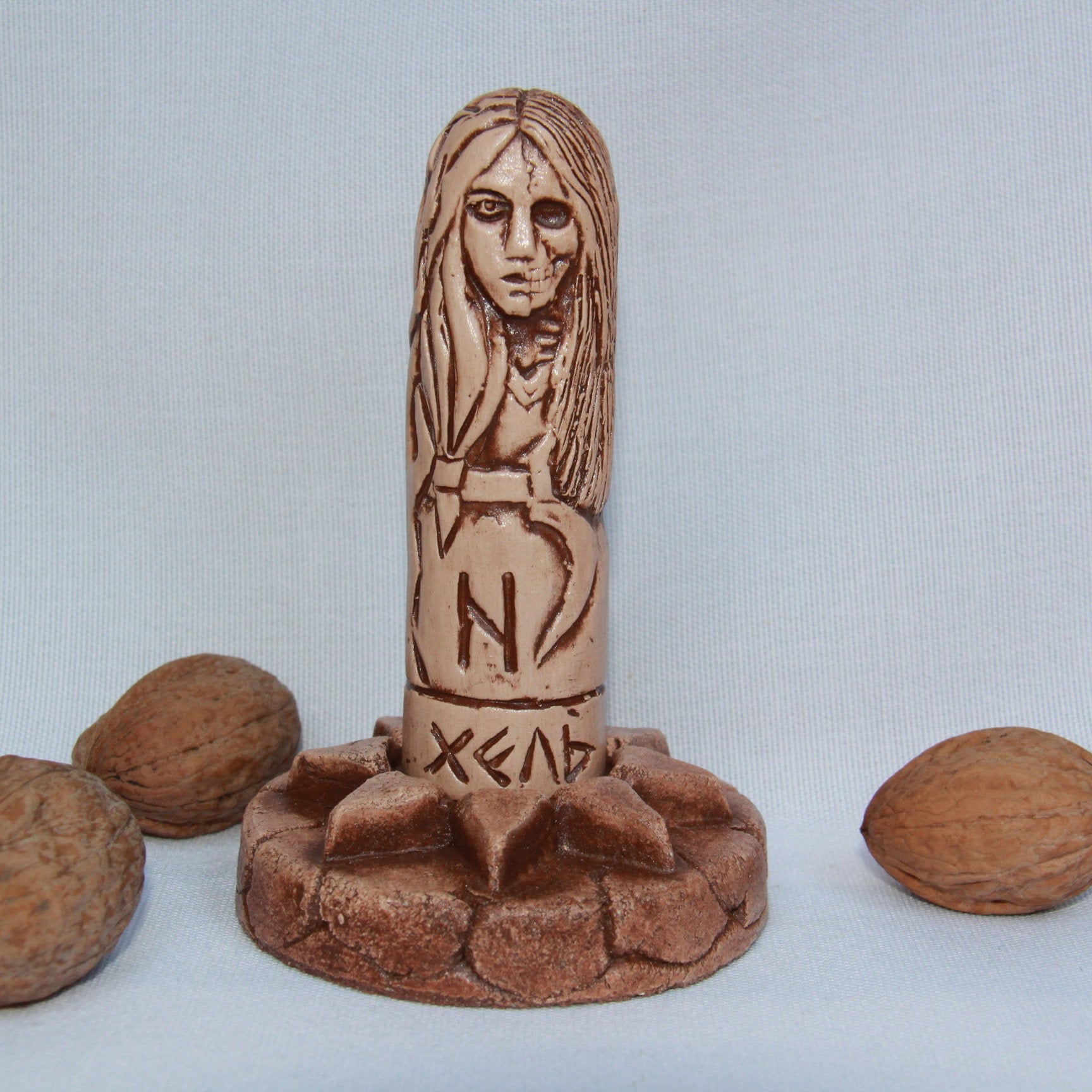 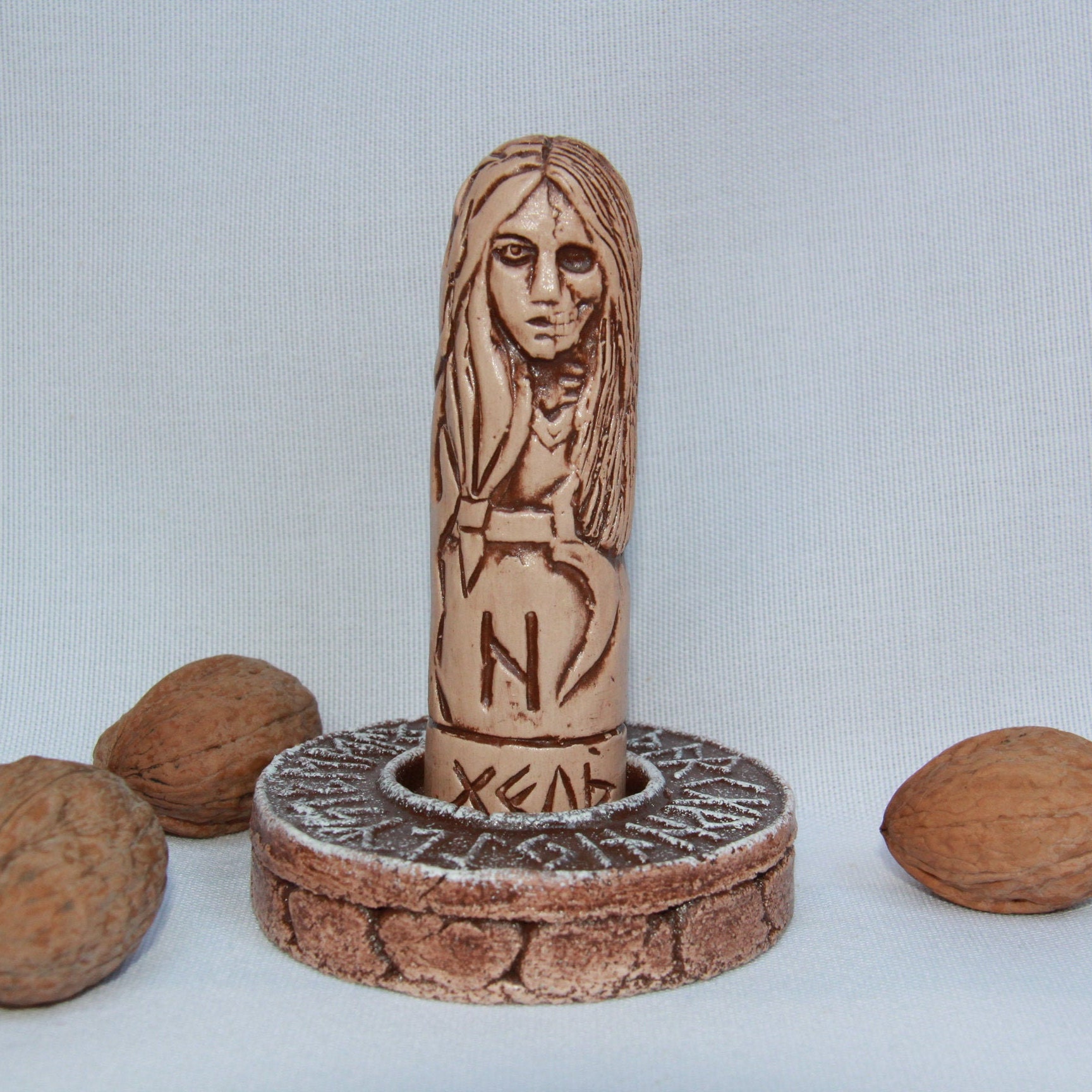 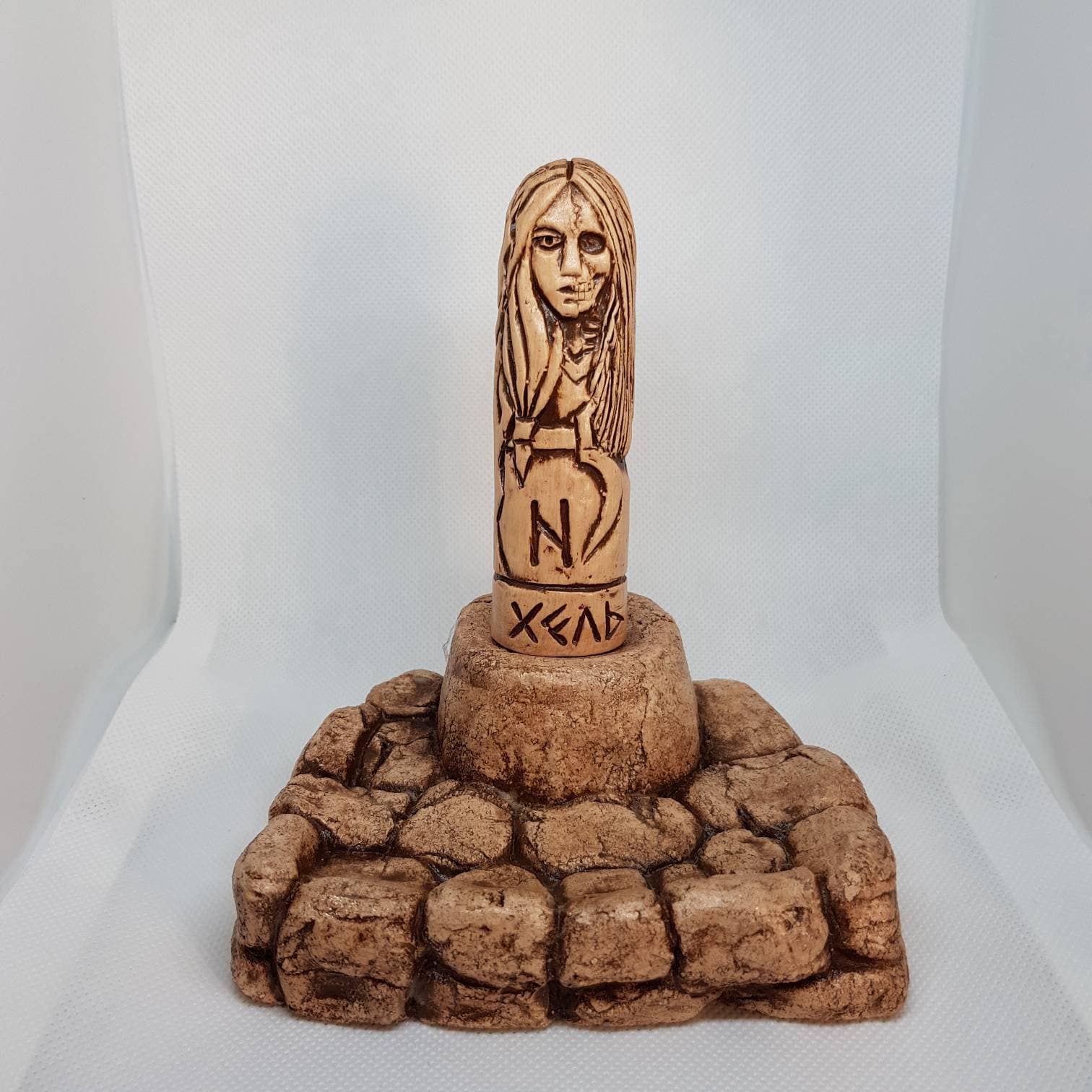 This is a small 10cm tall handcrafted from clay (ceramic) statue of Hel. Order it alone or in a combination with a Sun post or a Stone post.

In Norse mythology, Hel is a being who presides over a realm of the same name, where she receives a portion of the dead. Hel is attested in the Poetic Edda, compiled in the 13th century from earlier traditional sources, and the Prose Edda, written in the 13th century by Snorri Sturluson. In addition, she is mentioned in poems recorded in Heimskringlaand Egils saga that date from the 9th and 10th centuries, respectively. An episode in the Latin work Gesta Danorum, written in the 12th century by Saxo Grammaticus, is generally considered to refer to Hel, and Hel may appear on various Migration Periodbracteates.

In the Poetic Edda, Prose Edda, andHeimskringla, Hel is referred to as a daughter of Loki, and to "go to Hel" is to die. In theProse Edda book Gylfaginning, Hel is described as having been appointed by the god Odin as ruler of a realm of the same name, located in Niflheim. In the same source, her appearance is described as half blue and half flesh-coloured and further as having a gloomy, downcast appearance. The Prose Edda details that Hel rules over vast mansions with many servants in her underworld realm and plays a key role in the attempted resurrection of the god Baldr.

Scholarly theories have been proposed about Hel's potential connections to figures appearing in the 11th century Old English Gospel of Nicodemus and Old NorseBartholomeus saga postola, that she may have been considered a goddess with potential Indo-European parallels in Bhavani,Kali, and Mahakali or that Hel may have become a being only as a late personification of the location of the same name.

She is amazing! Thanks for this beauty!

My statues arrived in a reasonable amount of time. I absolutely love them! I am very happy with this purchase.

Looks just as described and they feel very sturdy! They'll look great on my altar.

Beautiful craftsmanship! Would buy from this craftsman again!