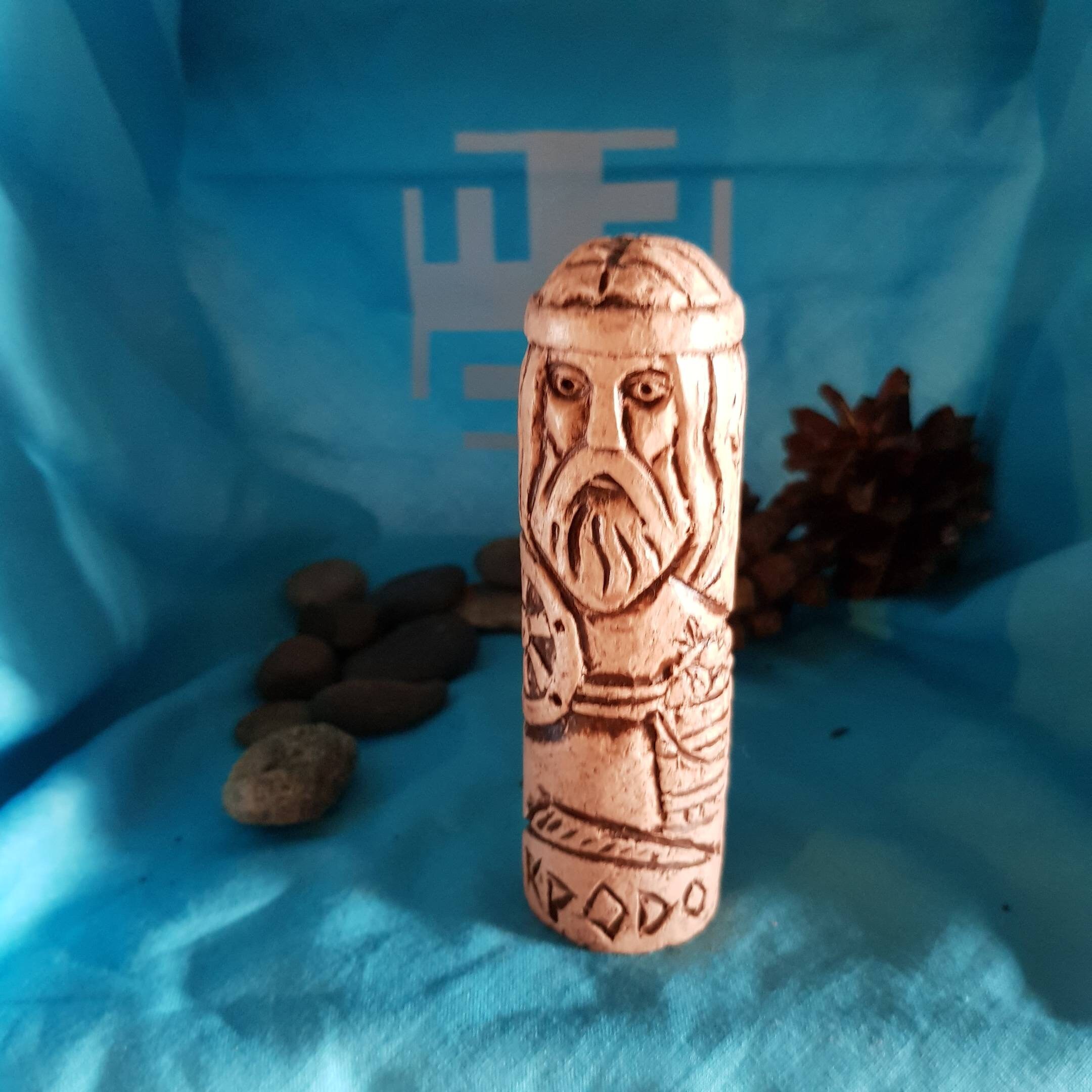 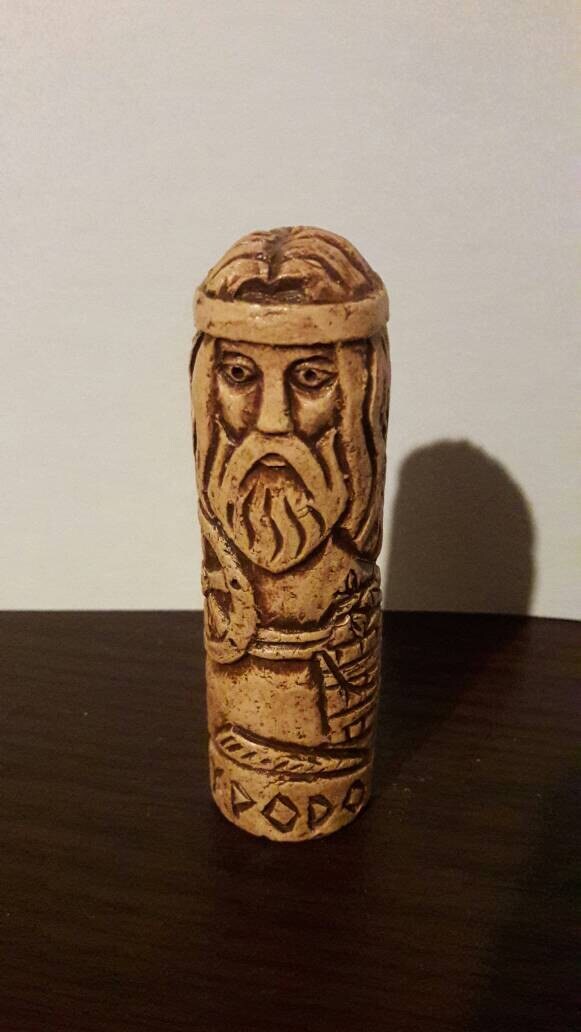 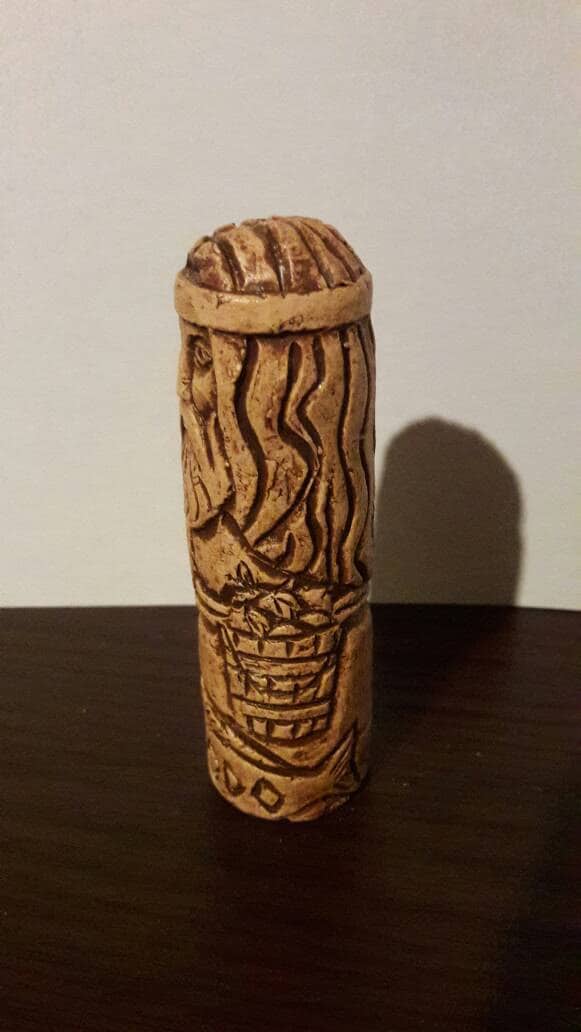 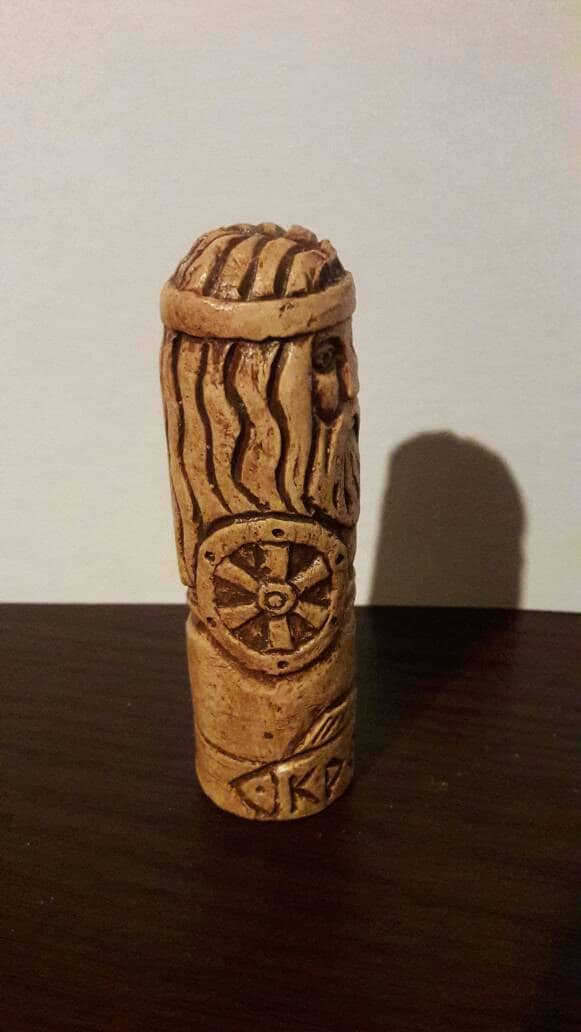 This is a small 10cm tall handcrafted from clay (ceramic) statue of Krodo. Order it alone or in a combination with a Sun post or a Stone post.

The Saxon Chronicle (written in Middle Low German: Cronecken der Sassen) contains a fanciful illustration of Krodo as a man clad in a linen garment with a wafting belt, who is standing on a large fish (a bass or perch) holding a bucket of roses in his right hand and an upright wheel in his left. The symbols possibly refer to the ancient four elements, though numerous further attempts at an interpretation have been given. According to Bothe, Julius Caesar during the conquests ofMagna Germania ordered the erection of several fortresses crowned by statues of Roman deities; one of them was dedicated to Saturn–named Krodo by the local population–and stood at the site of later Harzburg Castle. When in 780, during the Saxon Wars, theFrankish king Charlemagne occupied the region he allegedly had the pagan statue destroyed in the course of the Christianizationof the Saxon people.

Bothe's account was already rejected as a fable by contemporary scholars such asAlbert Krantz (c. 1450 – 1517). As the 15th century Saxon Chronicle is the first and only source, the existence of Krodo today is generally considered doubtful along with other supposed Germanic gods, such asOstara or Stuffo. Though his annals are obviously based on earlier chronicles like theSächsische Weltchronik, Bothe himself renders no references or sources of his assumption. Nevertheless the nearby Goslar collegiate church contained the so-calledKrodo Altar, which probably dates back to the 11th century and may have been transferred from Harzburg Castle by Emperor Henry III to his Imperial Palace of Goslar about 1047. In German folklore the tales of the pagan Krodo idol (Götze Crodo) were passed down apparently as a subject in the region of the villages of Götzenthal and Grotenleide near the Upper Saxon town of Meerane.

In the spa resort of Bad Harzburg several streets and public institutions are named after Krodo, the town advertises itself today using the figure as a mascot. A replica statue was erected at Harzburg Castle in 2007.