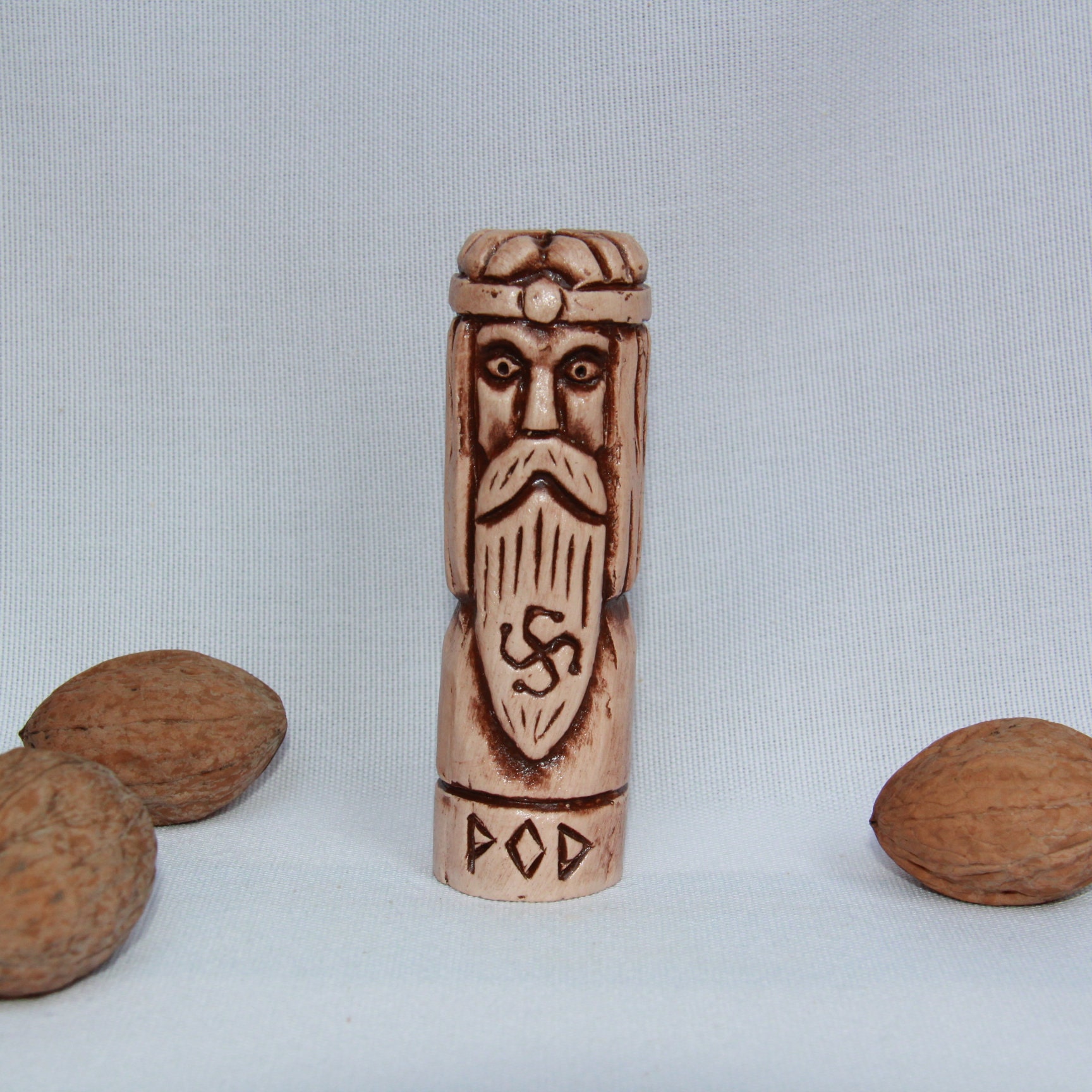 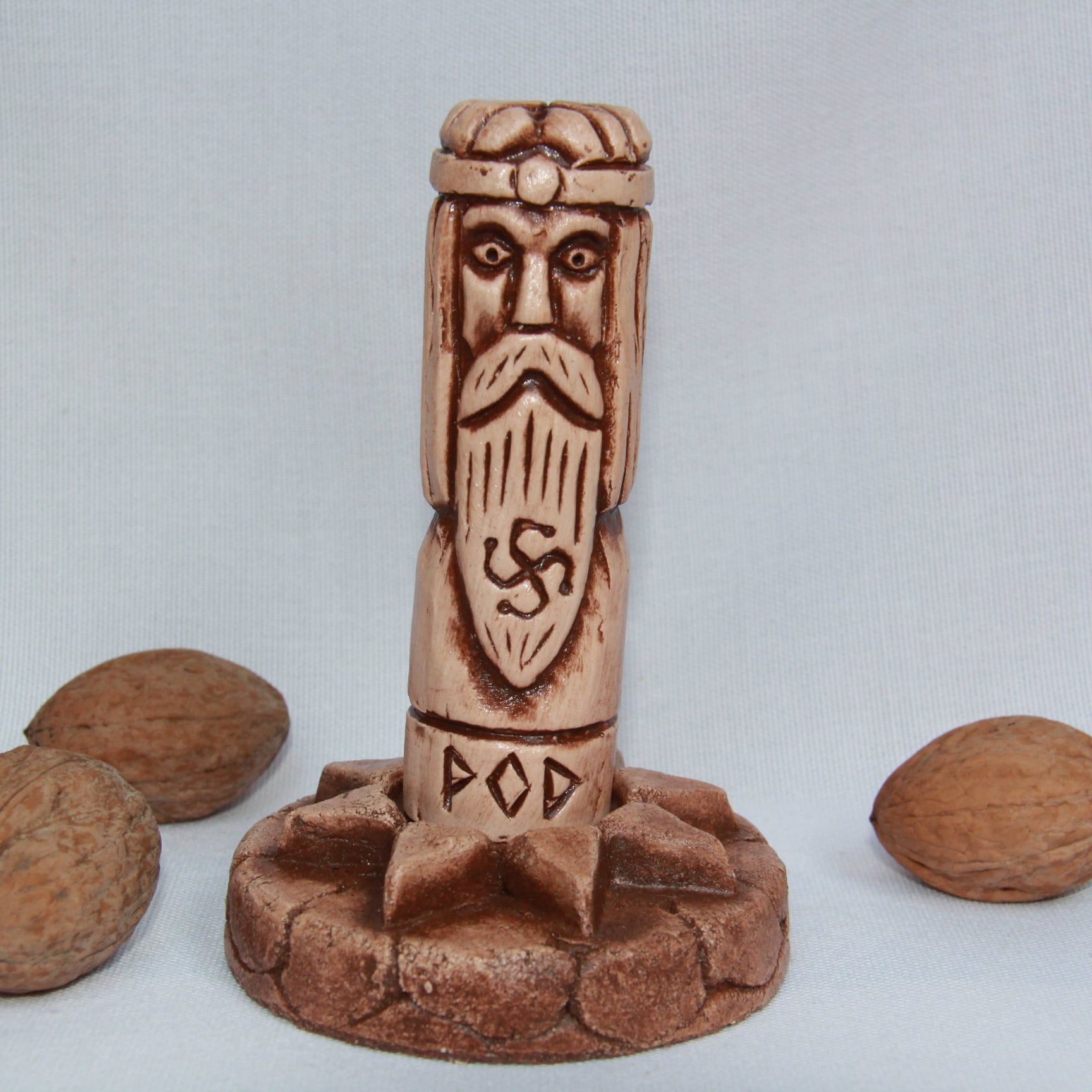 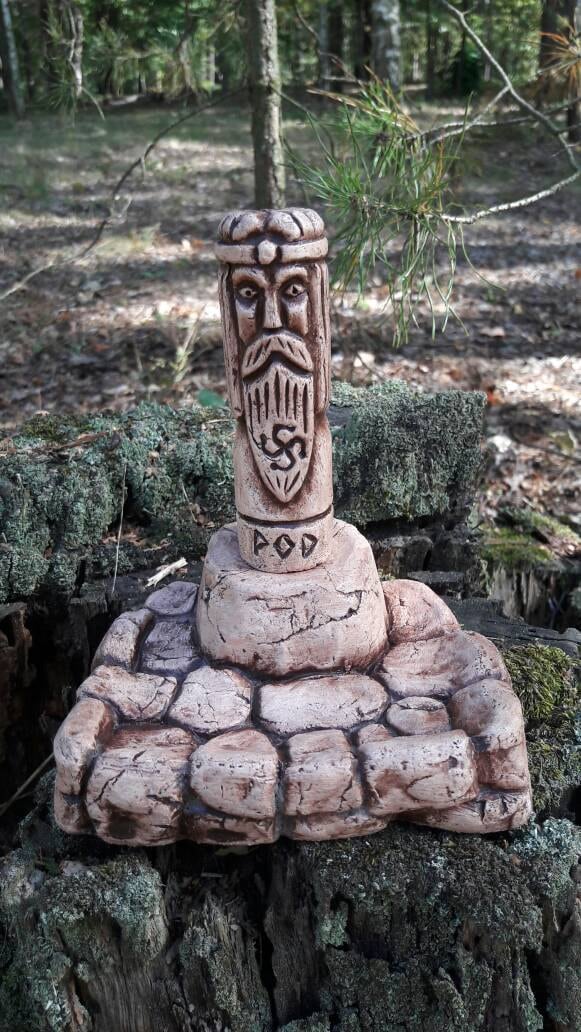 This is a small 10cm tall handcrafted from clay (ceramic) statue of Rod. Order it alone or in combination with a Sun Post or a Stone Post.

Rod (Slovenian: Rod, Belarusian, Bulgarian,Russian, Serbian: Род, Ukrainian: Рід,Croatian: Rod) is a Slavic deity, often mentioned in the Old Church Slavonic didactic literature which was directed against pagans. Rod is usually accompanied by Rozhanitsy (singular rozhanitsa), female deities or demigodesses who are his companions. The name "Rod", as well as the word "rozhanitsa", is derived from the Common Slavonic root meaning "birth", "origin", "kin" (compare Greekgenesis and its cognates, such as genealogy). In modern Russian, the word "rod" means "kin", and "rozhenitsa" is "a woman in childbirth".

As there are very few written sources concerning pre-Christian Slavic beliefs, details of the cult of Rod are still unclear. He is definitely connected with childbirth in some way; anti-Pagan didactic text often mention "Rozhanitsy meal" that was held the day afterChristmas (later Babinden), when midwives and mothers were honoured. Boris Rybakov believed Rod was the supreme deity in the Slavic pantheon, the creator of all life. Rybakov's conception was criticized by many scholars, including Leo Klejn and Nikolai Zubov. Klejn states Rod was rather a demigod, a personification of fate. Rozhanitsy, then, were similar to Parcae or even fairy godmothers in European fairytales, who visit newborns and foretell their future. In some South Slavic traditions rozhanitsy are known as "sudenitsy" (singular sudenitsa, lit. "she who judges"). Very similar to them are Dolya and Nedolya, or Srecha and Nesrecha, personifications of good and bad luck. Viljo Johannes Mansikka noted that in Slavic countries such Greek terms as τύχη (luck) and είμαρμένη (destiny) were sometimes translated as "rod" and "rozhenitsy". Jan Máchal believed that rozhanitsy were spirits of female ancestors who patronized the women of the kin (with Rod being the personification of the kin) and defined the destiny of their newborns.

In Vladimir Dahl's Explanatory Dictionary of the Living Great Russian Language Rod is referred to as a domovoi, a household spirit, associated with veneration of the ancestorsand family cults.

In Neopagan traditions, Rod is often considered to be the supreme god and the creator of all life and existence.