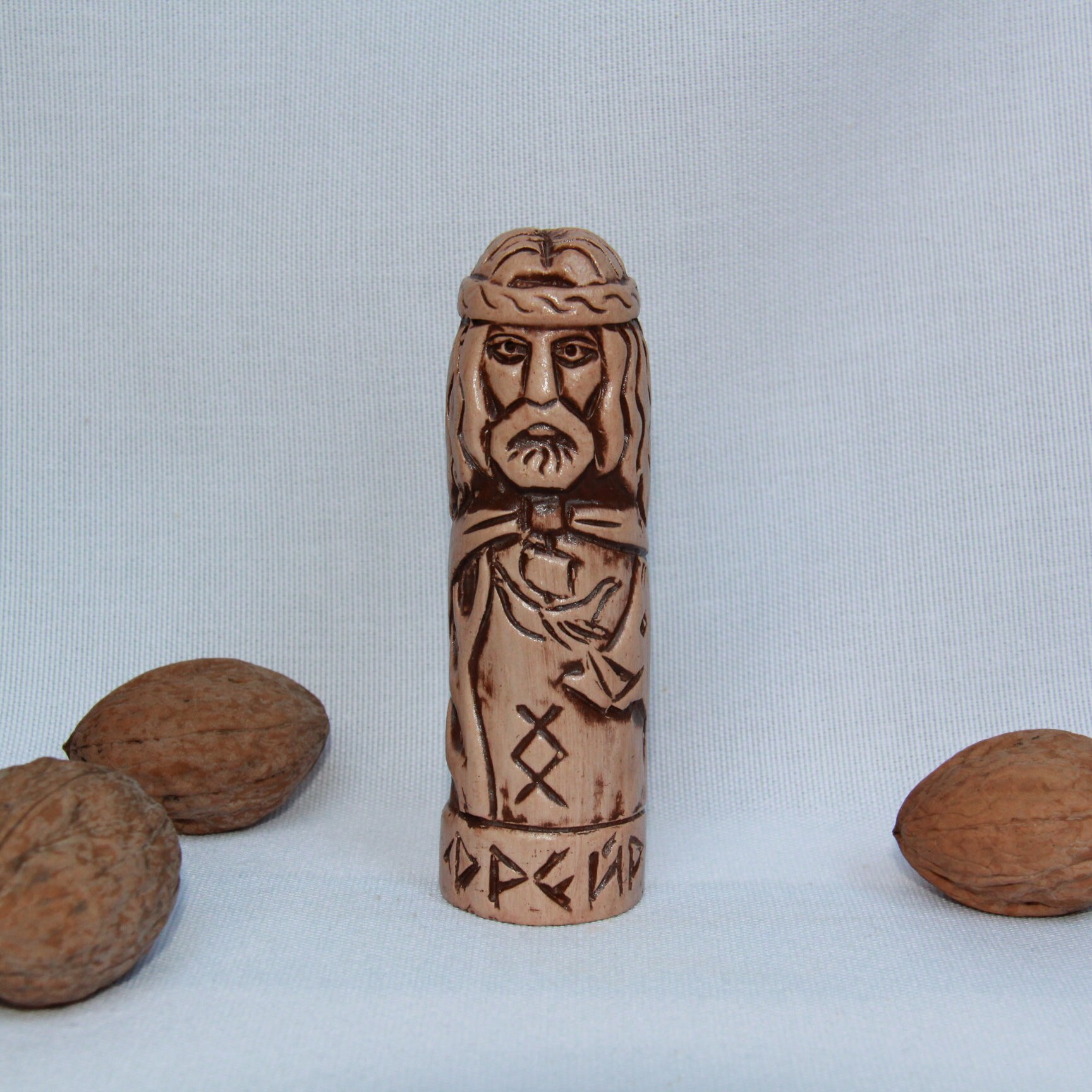 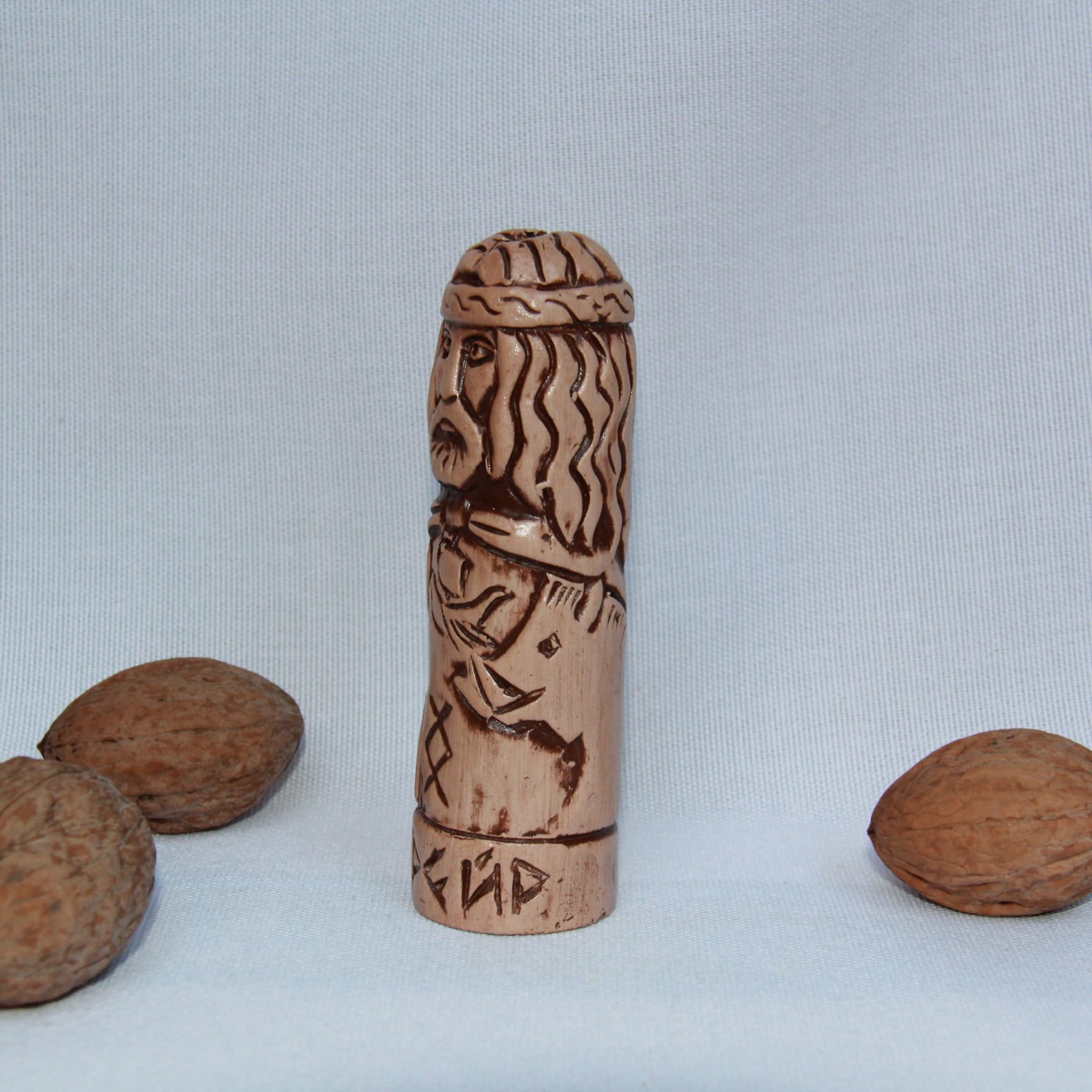 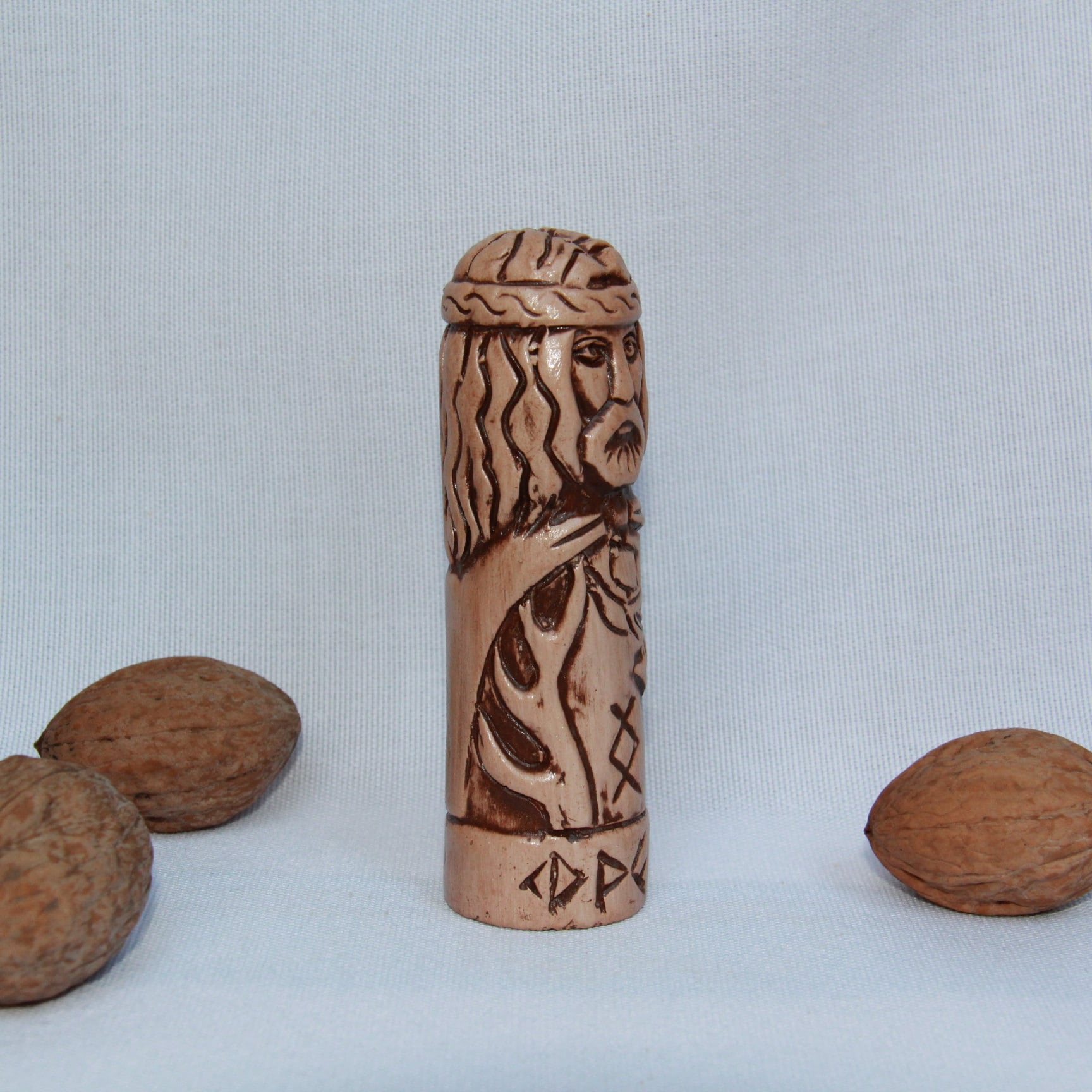 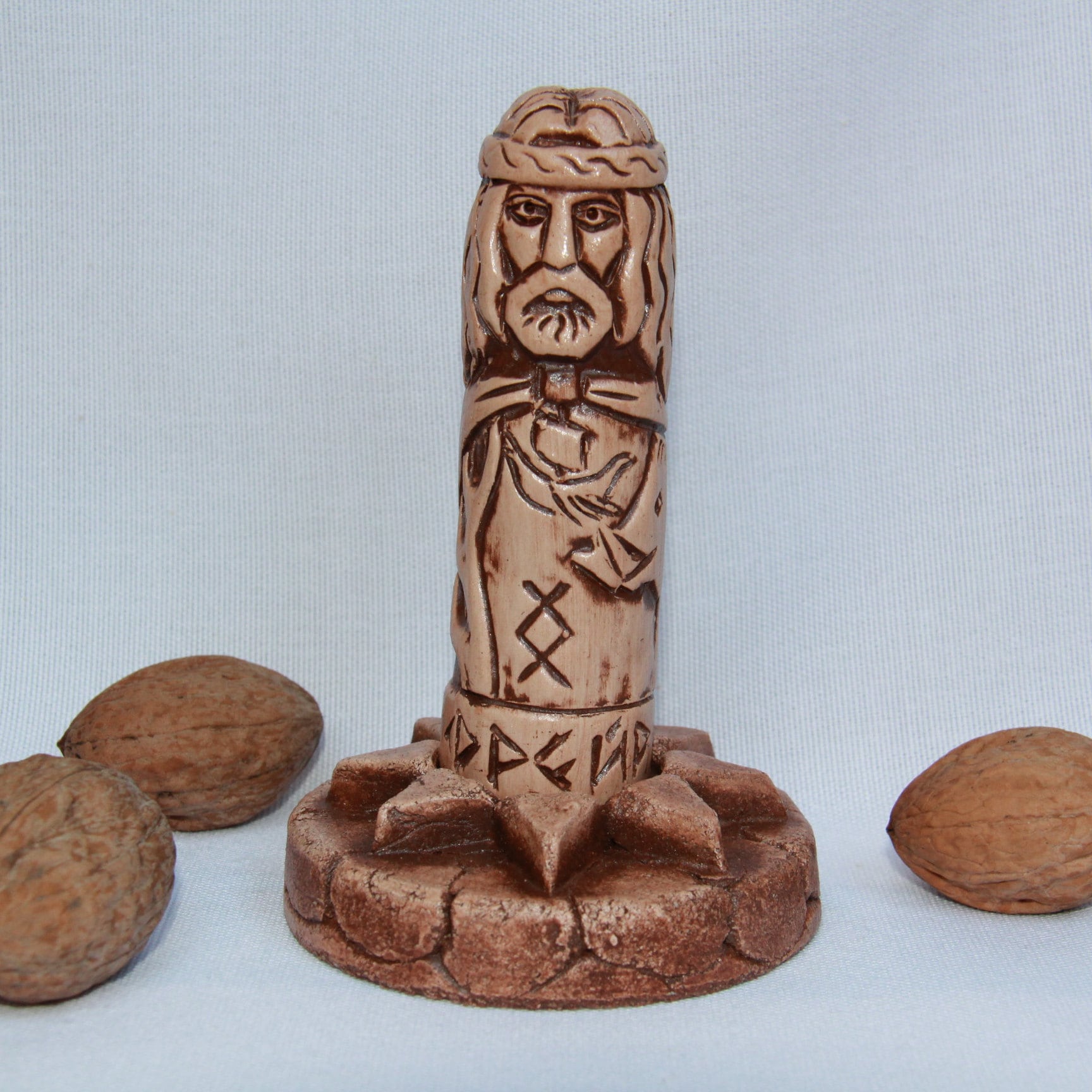 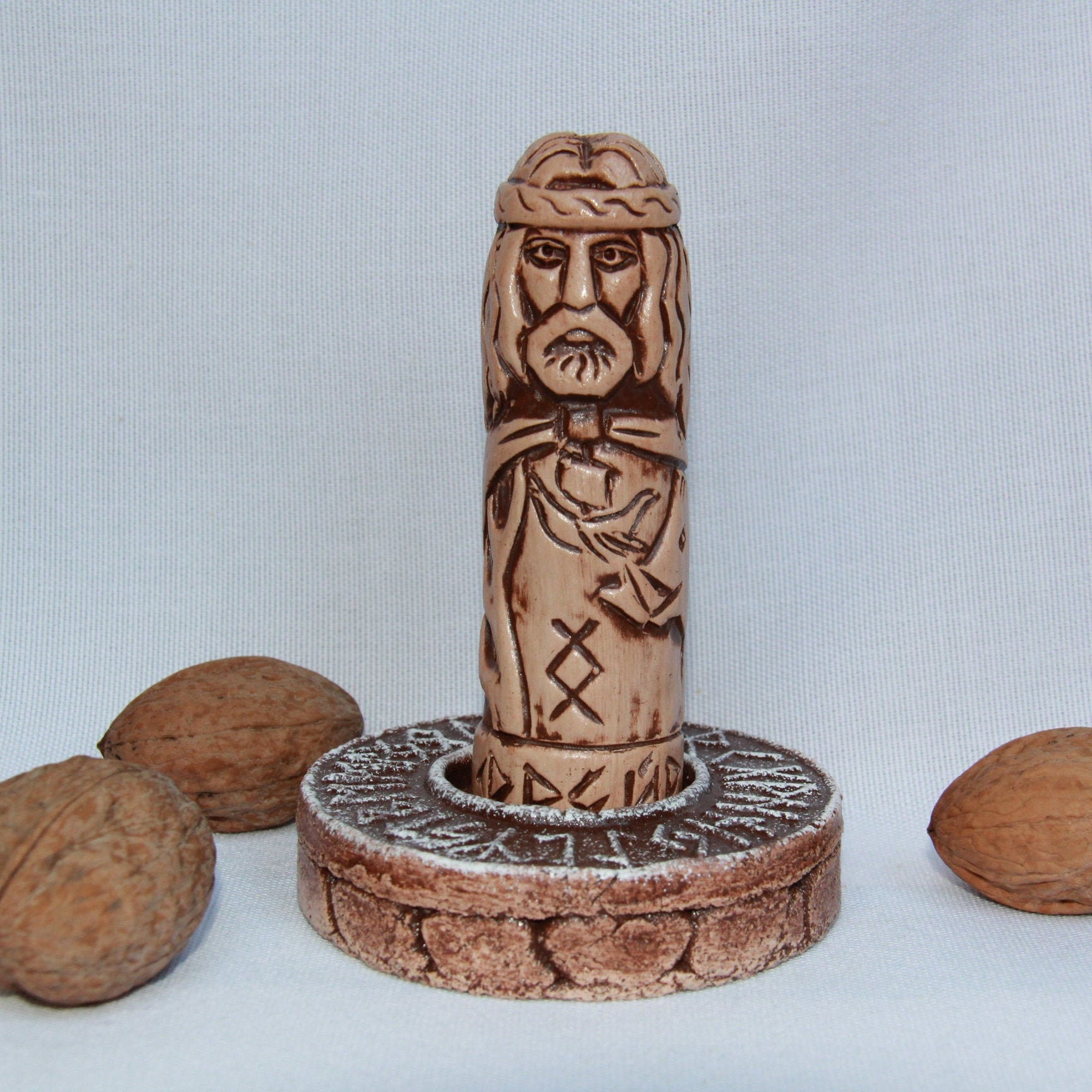 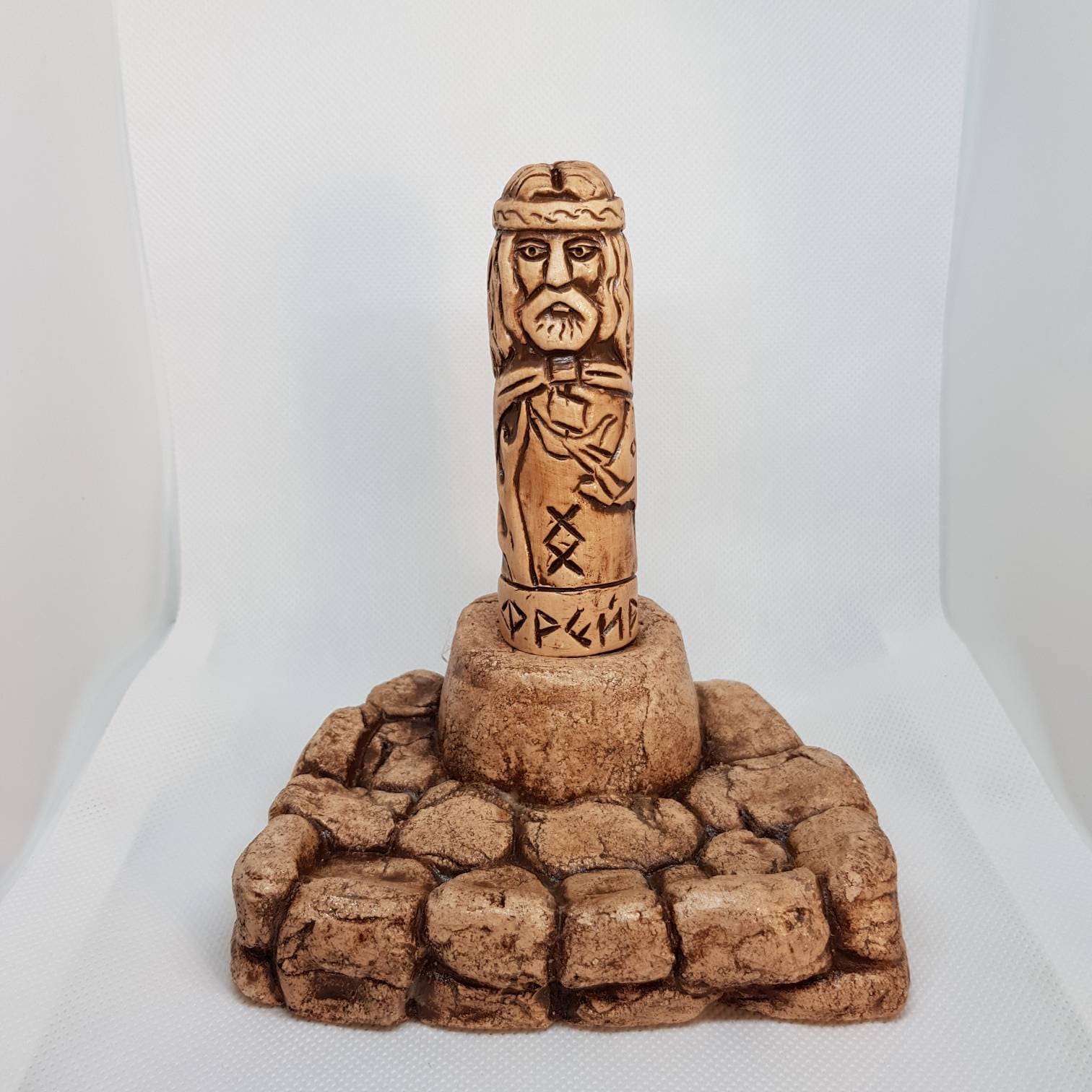 This is a small 10cm tall handcrafted from clay (ceramic) statue of Freyr. Order it alone or in a combination with a Sun Post or a Stone Post.

Freyr or Frey is one of the most important gods of Norse religion. The name is conjectured to derive from the Proto-Norse* frawjaz, "lord." Freyr was associated with sacral kingship, virility and prosperity, with sunshine and fair weather, and was pictured as a phallic fertility god; Freyr is said to "bestow peace and pleasure on mortals." Freyr, sometimes referred to as Yngvi-Freyr, was especially associated with Sweden and seen as an ancestor of the Swedish royal house.

In the Icelandic books the Poetic Edda and theProse Edda, Freyr is presented as one of the Vanir, the son of the sea god Njörðr, as well as the twin brother of the goddess Freyja. The gods gave him Álfheimr, the realm of the Elves, as a teething present. He rides the shining dwarf-made boar Gullinbursti and possesses the ship Skíðblaðnir which always has a favorable breeze and can be folded together and carried in a pouch when it is not being used. He has the servants Skírnir, Byggvir and Beyla.

The most extensive surviving Freyr myth relates Freyr's falling in love with the female jötunn Gerðr. Eventually, she becomes his wife but first Freyr has to give away his magic sword which fights on its own "if wise be he who wields it." Although deprived of this weapon, Freyr defeats the jötunn Beli with anantler. However, lacking his sword, Freyr will be killed by the fire jötunn Surtr during the events of Ragnarök.

Like other Germanic deities, veneration of Freyr is revived in the modern period in Heathenry.

I'm very happy with my purchase. I purchased 5 of them and they are very well made and the perfect smaller size.

Gorgeous detail. I got the Freya one to go along side it. I love the craftsmanship. I highly recommend purchasing one if you've been thinking about it.

I really love both the color and the texture of this casting! The original looks like it took a lot of time to create, thank you for a charming piece!