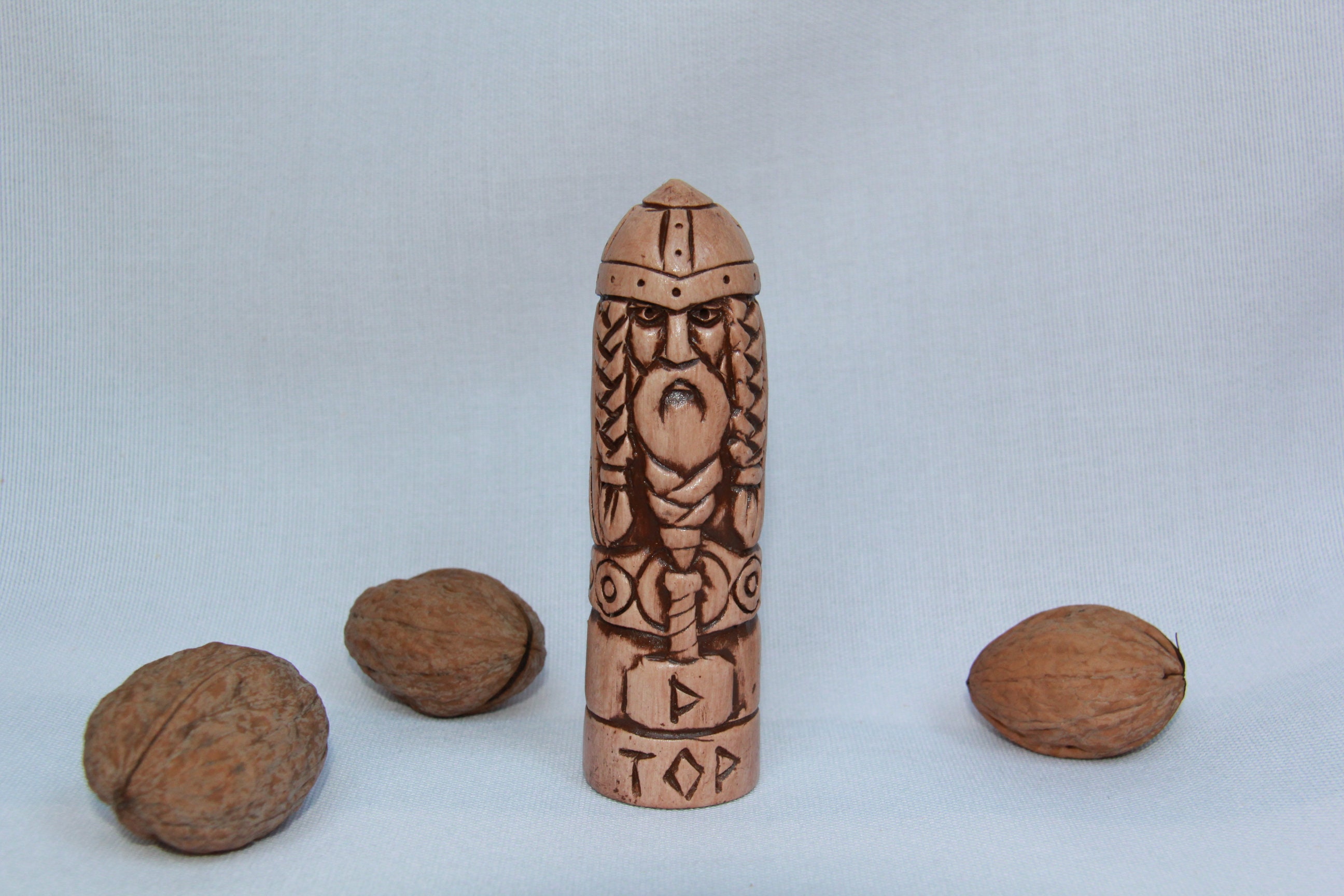 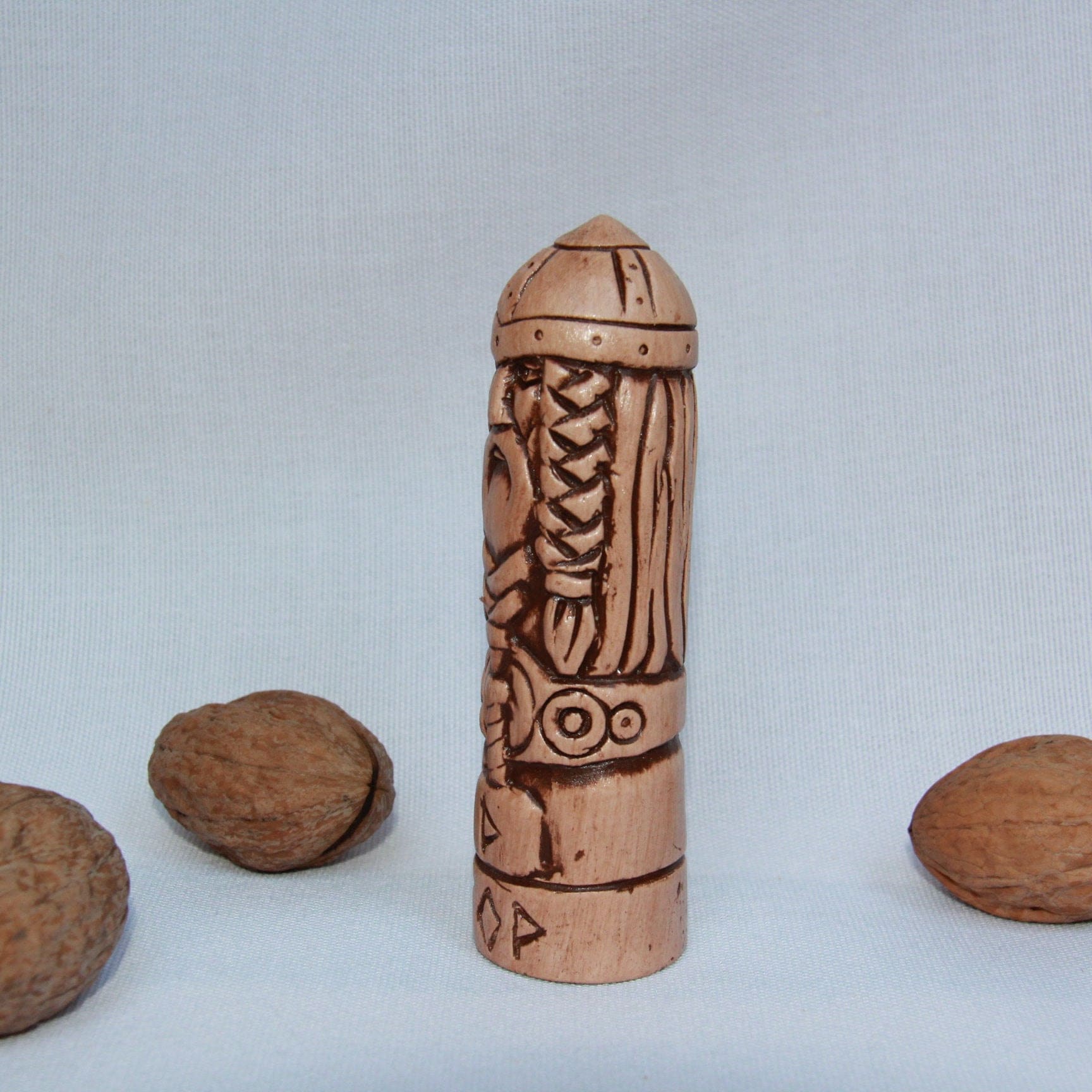 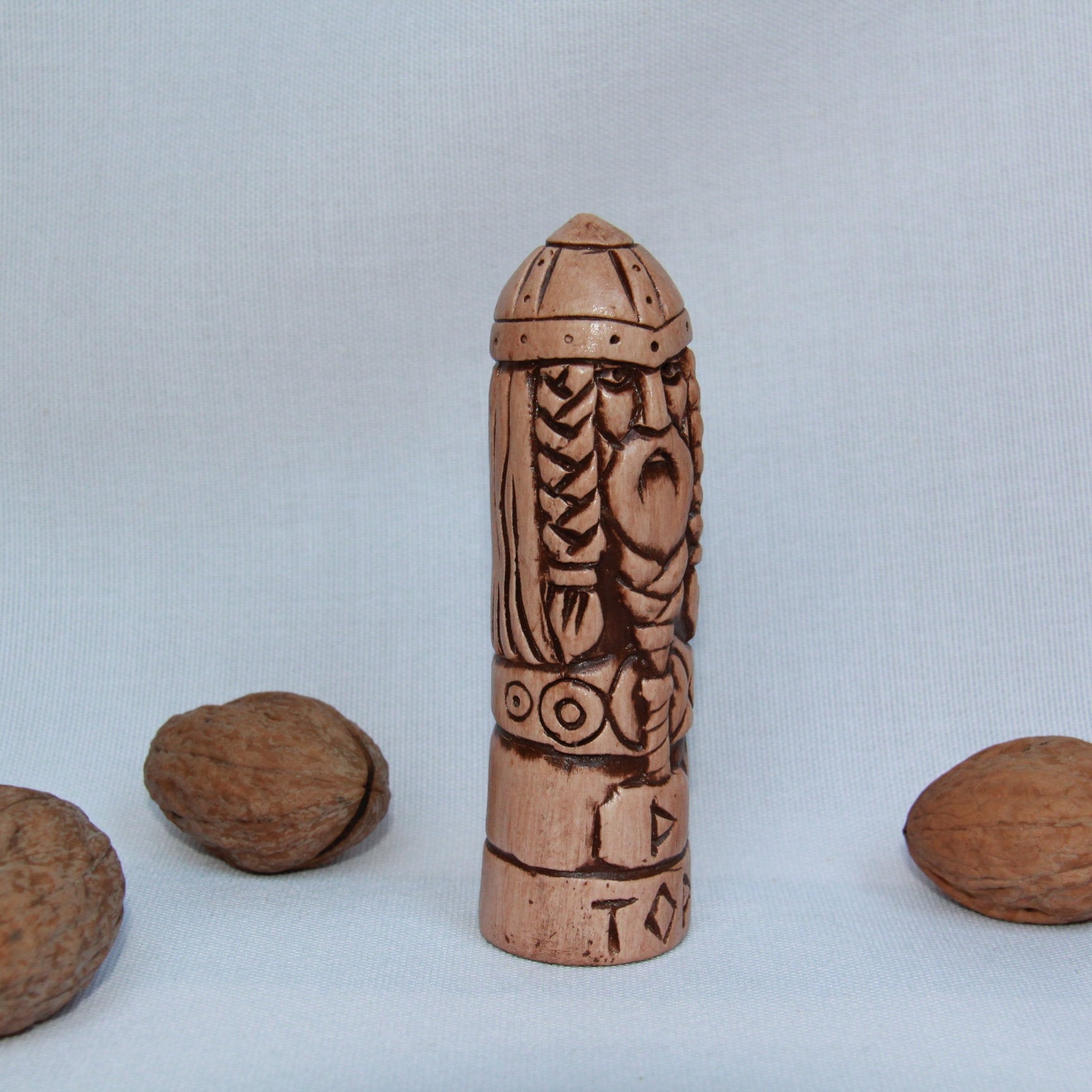 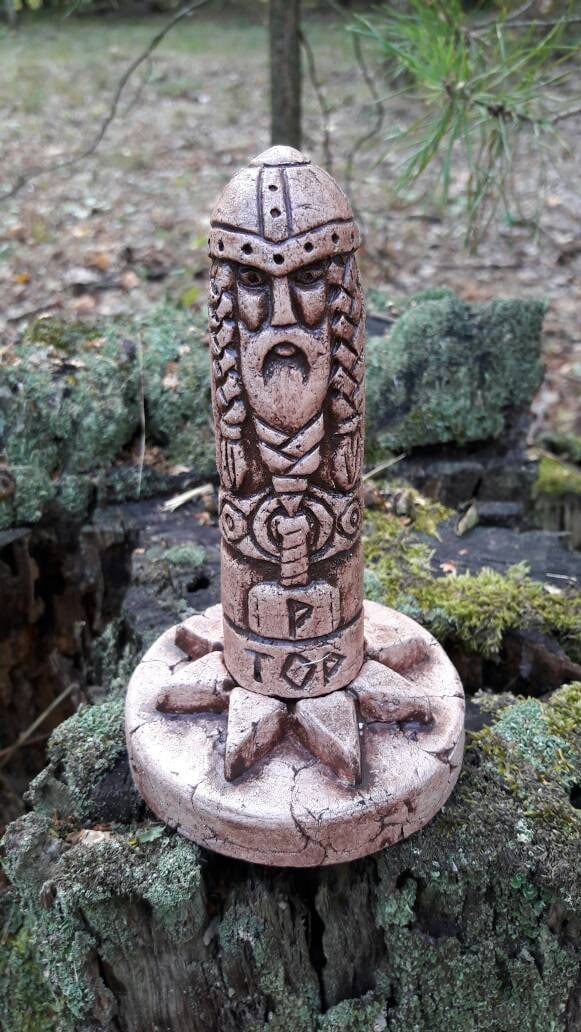 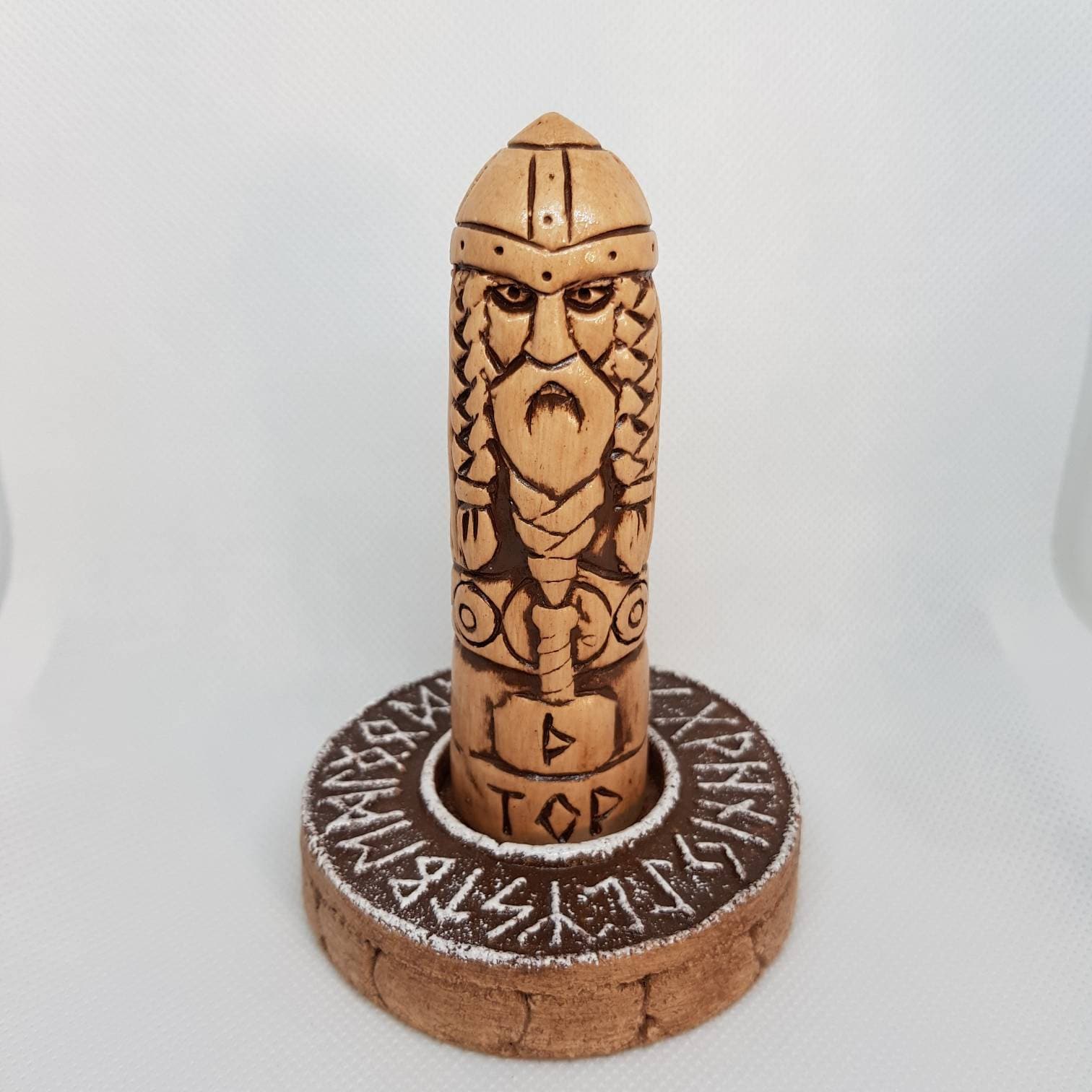 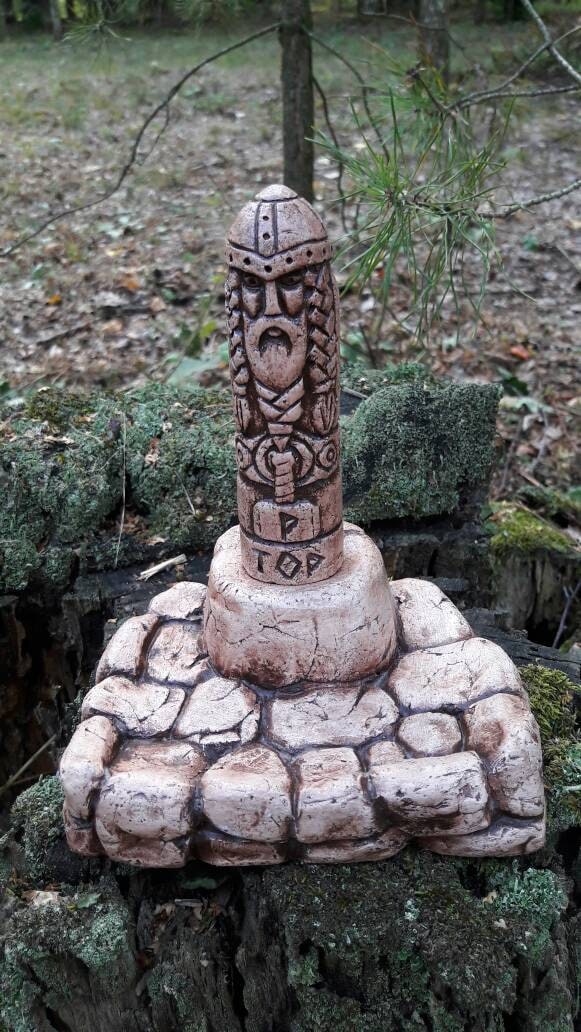 This is a small 10cm handcrafted statue of Thor. It can be ordered alone, or in a combination with a sun post or a stone post.

In Norse mythology, Thor (/θɔːr/; from Old Norse Þórr) is a hammer-wielding godassociated with thunder, lightning, storms,oak trees, strength, the protection of mankind, and also hallowing and fertility. The cognate deity in wider Germanic mythology andpaganism was known in Old English as Þunorand in Old High German as Donar (runic þonarᚦᛟᚾᚨᚱ), stemming from a Common Germanic*Þunraz (meaning "thunder").

Ultimately stemming from Proto-Indo-European religion, Thor is a prominently mentioned god throughout the recorded history of the Germanic peoples, from theRoman occupation of regions of Germania, to the tribal expansions of the Migration Period, to his high popularity during the Viking Age, when, in the face of the process of theChristianization of Scandinavia, emblems of his hammer, Mjölnir, were worn in defiance and Norse pagan personal names containing the name of the god bear witness to his popularity. Into the modern period, Thor continued to be acknowledged in rural folklore throughout Germanic regions. Thor is frequently referred to in place names, the day of the week Thursday ("Thor's day"; Old English Thunresdæg, Thunor's day; German"Donnerstag" Donar's day; Dutch "donderdag") bears his name, and names stemming from the pagan period containing his own continue to be used today.

In Norse mythology, largely recorded inIceland from traditional material stemming from Scandinavia, numerous tales and information about Thor are provided. In these sources, Thor bears at least fourteen names, is the husband of the golden-haired goddessSif, is the lover of the jötunn Járnsaxa, and is generally described as fierce-eyed, red-hairedand red-bearded. With Sif, Thor fathered the goddess (and possible valkyrie) Þrúðr; with Járnsaxa, he fathered Magni; with a mother whose name is not recorded, he fatheredMóði, and he is the stepfather of the god Ullr. The same sources list Thor as the son of the god Odin and the personified earth, Fjörgyn, and by way of Odin, Thor has numerous brothers. Thor has two servants, Þjálfi and Röskva, rides in a cart or chariot pulled by two goats, Tanngrisnir and Tanngnjóstr (that he eats and resurrects), and is ascribed three dwellings (Bilskirnir, Þrúðheimr, andÞrúðvangr). Thor wields the mountain-crushing hammer, Mjölnir, wears the beltMegingjörð and the iron gloves Járngreipr, and owns the staff Gríðarvölr. Thor's exploits, including his relentless slaughter of his foes and fierce battles with the monstrous serpentJörmungandr—and their foretold mutual deaths during the events of Ragnarök—are recorded throughout sources for Norse mythology.

Thor has inspired numerous works of art and references to Thor appear in modern popular culture. Like other Germanic deities, veneration of Thor is revived in the modern period in Heathenry.

Absolutely beautiful. A wonderful addition to my altar. I couldn't recommend them more.