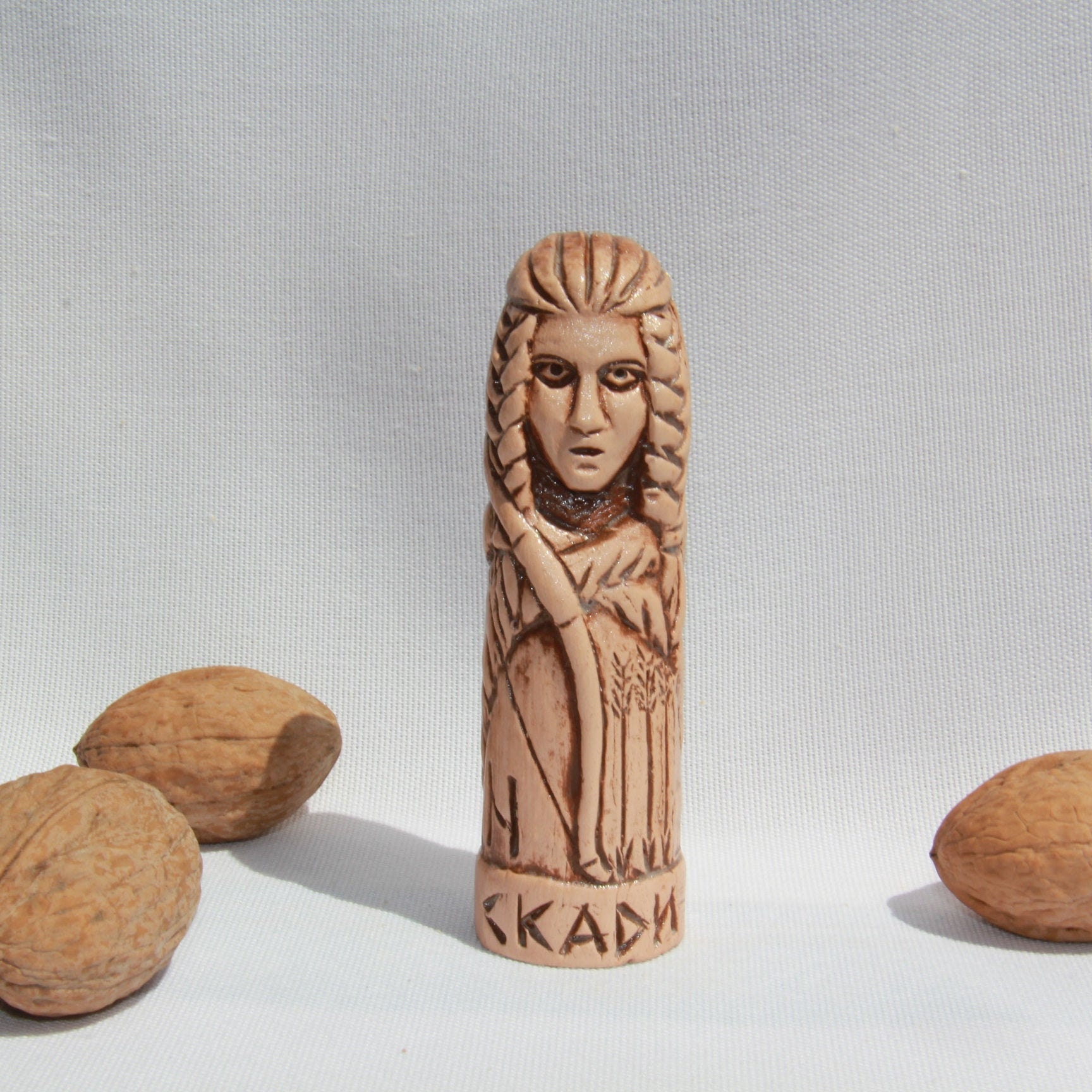 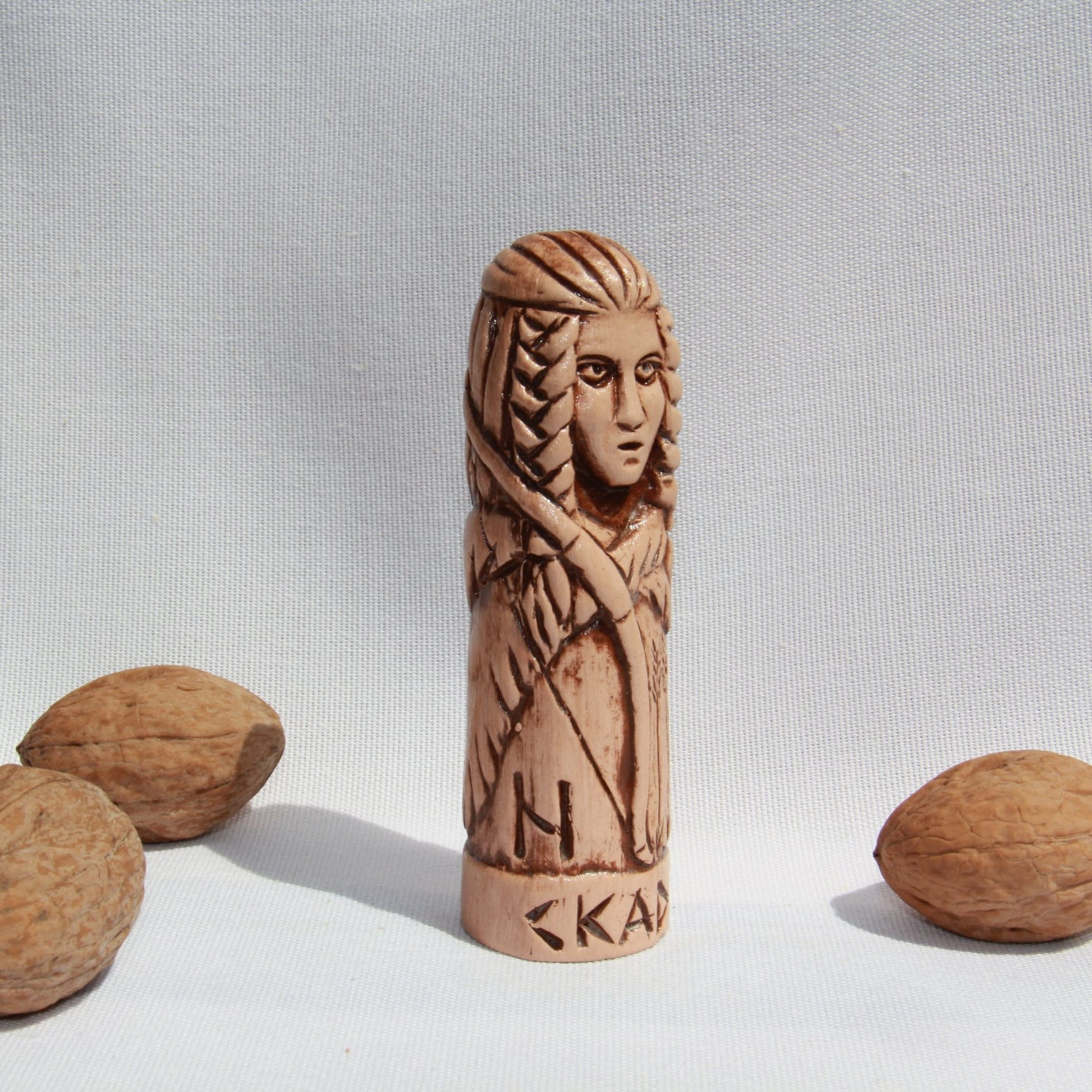 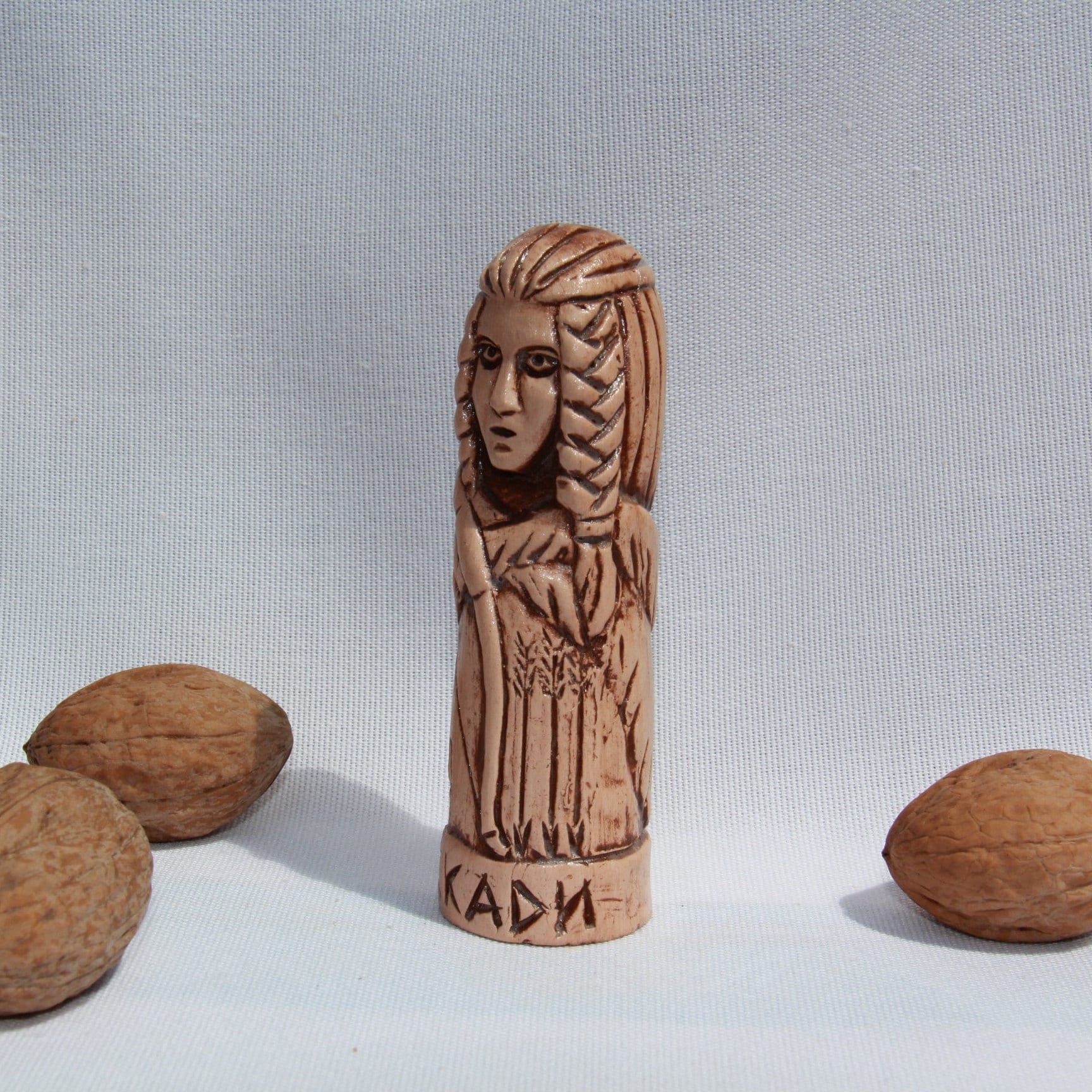 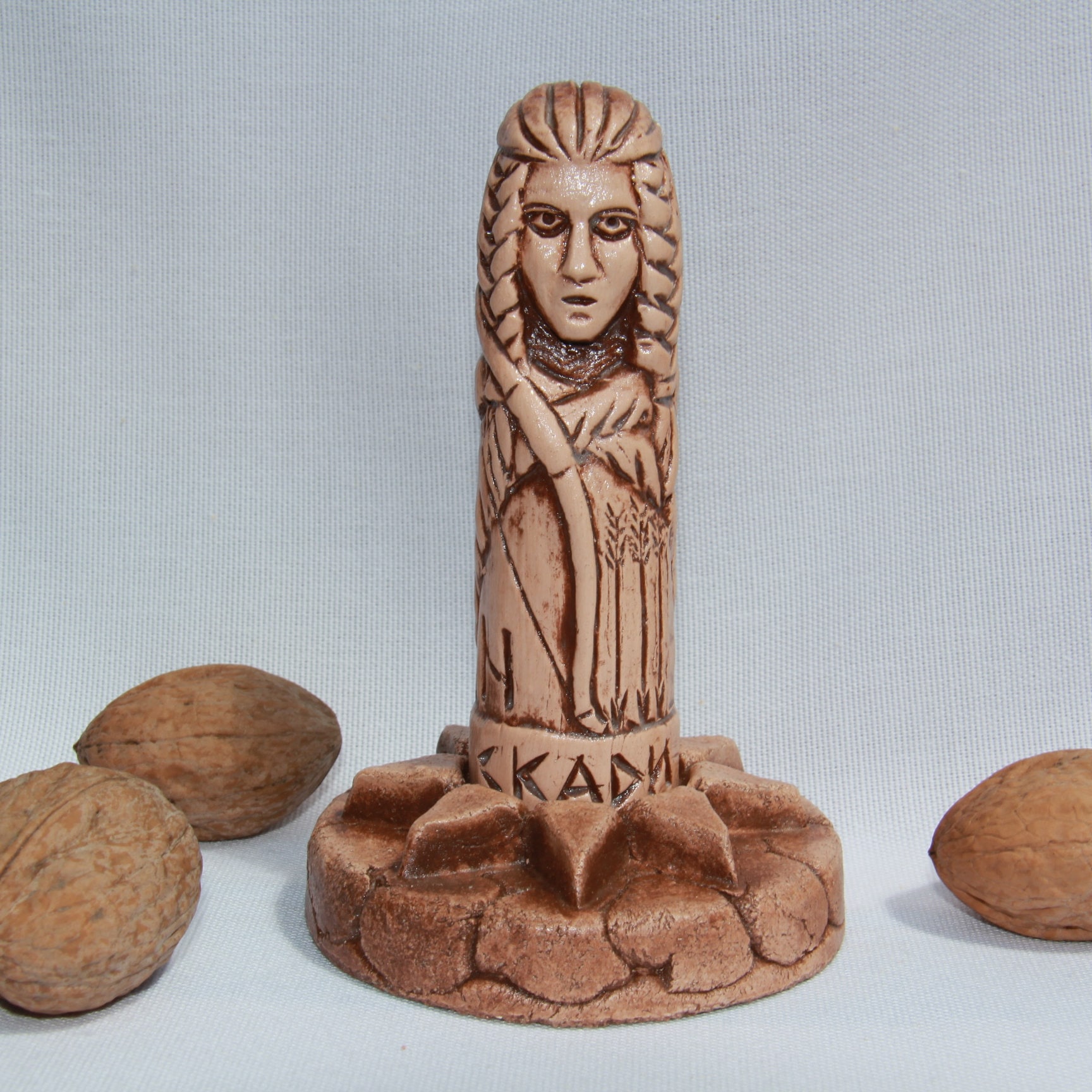 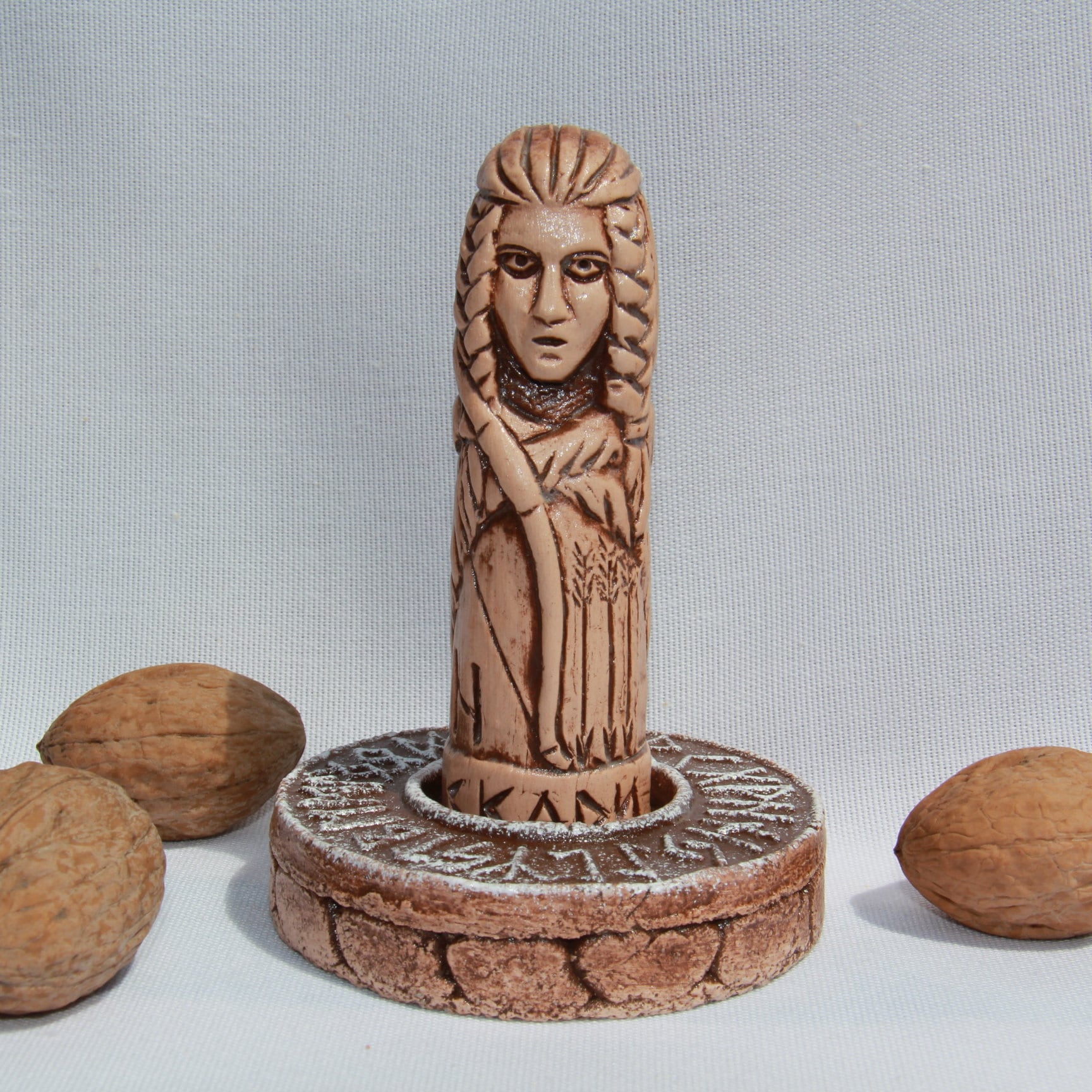 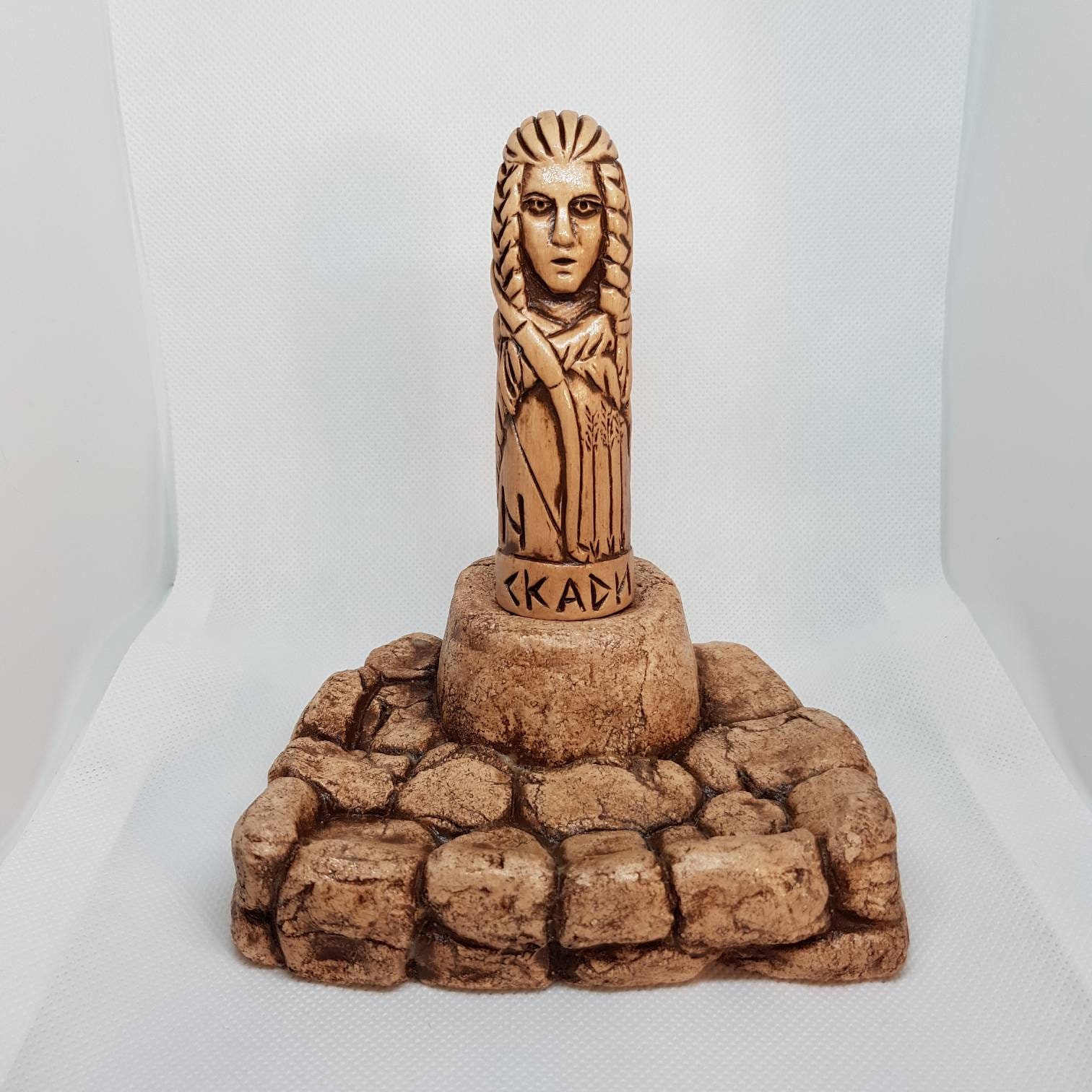 This is a small 10cm tall handcrafted from clay (ceramic) statue of Skadi. Order it alone or in combination with a Sun Post or a Stone Post.

In Norse mythology, Skaði (sometimes anglicized as Skadi, Skade, or Skathi) is a jötunn and a female deity associated with bowhunting, skiing, winter, and mountains. Skaði is attested in the Poetic Edda, compiled in the 13th century from earlier traditional sources; the Prose Edda and in Heimskringla, written in the 13th century by Snorri Sturluson, and in the works of skalds.

In all sources, Skaði is the daughter of the deceased Þjazi, and Skaði married the deity Njörðr as part of the compensation provided by the deities for killing her father Þjazi. In Heimskringla, Skaði is described as having split up with Njörðr and as later having married the deity Odin, and that the two produced many children together. In both the Poetic Edda and the Prose Edda, Skaði is responsible for placing the serpent that drips venom onto the bound Loki. Skaði is alternately referred to as Öndurguð (Old Norse "ski deity") and Öndurdís (Old Norse "skidís", often translated as "lady").

The etymology of the name Skaði is uncertain, but may be connected with the original form of Scandinavia. Some place names in Scandinavia, particularly in Sweden, refer to Skaði. Scholars have theorized a potential connection between Skaði and the deity Ullr(who is also associated with skiing and appears most frequently in place names in Sweden), a particular relationship with the jötunn Loki, and that Scandinavia may be related to the name Skaði (potentially meaning "Skaði's island") or the name may be connected to an Old Norse noun meaning "harm". Skaði has inspired various works of art.

Very beautiful and well made! Just what I needed for my alters. Thank you!

Delivery took a while because of the pandemic but it is beautifully crafted and I absolutely love it. Hail Skadhi!

Incredible as always. Thank you!